Printed Maps & App
Stay found. Stay informead. Our premium printed topographic maps and matching app for a once in a lifetime adventure

Active Fires & Smoke
Know before you go! Get the lastest active fire & smoke information for your favorite trail

Gear Builder
Create your own fully customizable gear list with weight, pricing and divisable by section.

Complete Gear Lists
Hundreds of complete gear lists by those that walked the walk.

About
Where it all begins.

For instance, the PCT/JMT rarely goes below 10,000 feet for about 200 miles. How does snow information collected 3,000 feet below the trail benefit a hiker? It doesn't. It's misleading. That what snow pack does.

On June 7th, the most critical time of the year for northbound hikers departing Kennedy Meadow, trail snow shows half the trail still covered in snow. The bottom graph is snow pack and it is showing no snow! 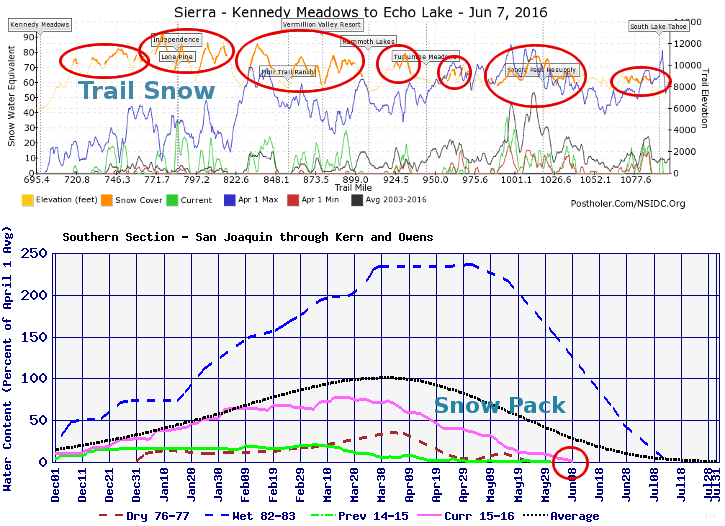 Further, the snow pack chart above shows a well below average year. However, for trail snow the chart below shows a very average year.

Snow pack can be a handy and widely available measure of how the winter is shaping up. It doesn't tell the whole story. Given above average precipation and warmer than normal temperature snow pack may show below normal, but at trail altitude, snow can actually be above normal. By virtue of being higher, the higher terrain is less affected by warmer temperature. This is a the heart of the difference.

We hope this was informative and wish you the best on your hike!