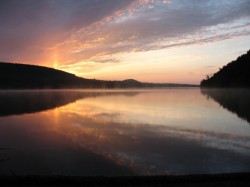 Early wake up as I wanted to catch the sunrise across the lake and the squirrels acted as an alarm clock. I was also nervous about a correction bolus that I made based on my sensor reading (big mistake since I didn't check via fingerstick). My rustling to move closer to the shore must have woke Lulu since she emerged shortly afterward. Met CCC on the beach as I was working on breakfast. On trail at 7. Leap-frogged Bojangles all morning as we hiked toward Rainbow Lake over Nesuntabunt Mountain. Atop there is a side trail to a wonderful view of Nahmakanta Lake below. Blew passed Wadleigh Stream Lean-to with no interest in stopping. Met a fisherman at Crescent Pond and then enjoyed a view of Pollywog Gorge. Down along Rainbow Stream among the sluices, I spotted a brown rodent. I didn't know my rodents, but it wasn't a beaver or otter, too small to be a marten. I thought, maybe mink, maybe fisher?

Stopped in at Rainbow Stream Lean-to for a break and a snack. I met Snake Eyes and Cannon there along with Maggie who I'd met back at Moxie Bald Mtn. I ended up taking some extra time and ate my whole lunch. Also, clearing their campsite was the college group that the ranger asked me about. Turns out there were about a dozen of them out for freshman orientation.

The hike to Rainbow Lake campsite was challenging with the mudholes and bogs and boulder hops. I stopped in at the spring there for a water fill-up and met Happy Feet's dad hiking SOBO. I asked him along with the next few SOBOs about camping a little further north.

I stopped near Rainbow Lake for the night and met Chris from Philly who stopped by about 5pm. We chatted about not wanting to finish and he really was in no rush to continue. He did eventually hike on saying that he'd probably stay at Hurd Brook Lean-to. I had been hearing that a group of about 7 would plan to summit on Friday, so I've been tempted to join them. I don't want to take a spot at the Birches that would delay someone else from staying there, so I am undecided at this point. I did mention to Chris though that with only 8 miles left to go there would be no one to hug in celebration. At 6:39pm, I am in my tent because of the wind. I'm hoping it will die down after sunset, but a front is coming through. I already had a widow-maker drop just a few feet from my head earlier today. Been praying that everything stays intact and nothing blows away. I just noticed a light film of dirt coating everything in my tent probably from the windbreak I built from logs at the foot of my tent.