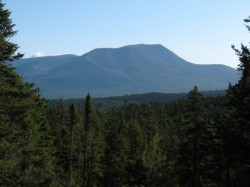 Well. This is it. Just 8 miles today. I woke up to a day of beautiful weather. The wind died down just slightly but it still blew all night. I think that campsite is at a venturi point. Anyway, I started the trail about 7am and just took my time being in no big rush as mentioned yesterday. I followed another hiker briefly up Rainbow Ledges where a fantastic view of Katahdin awaited in a pure blue sky. He had just also flushed a baby moose from the area near the summit of the Ledges, so there will be no on trail sightings of moose this trip (though I did see one along the roadside at Crawford Notch in New Hampshire). Anyway, the other hiker's camera batteries had just went kaput, and I had no replacements to offer as I had just switched my own camera batteries out. Just after 9am, I stopped in at Hurd Brook Lean-to for a brief check. The last little bit of trail was easy going and I made out the opening of the woods next to Golden Road. Snapped a photo of the northern 100-mile wilderness warning sign and then into the sunlight. I headed down the road to Abol Bridge and a fellow was sitting with several cameras soaking in the scene and awaiting some paddlers to float below. He offered to take my photo as a finish.

I walked on to the Abol Bridge Campground store for a bacon cheeseburger. I was expecting fresh off the grill, but it turns out it was in plastic and cooked in the microwave. It was fairly good for eating out of my pack for four days. I asked a few folks about hitching to Kokadjo and got several responses. I was still considering climbing Katahdin tomorrow, so I was undecided about my next step. The mountain was calling, so I hiked into Baxter to see if there was a ridge runner. Nope. I checked the sign in sheet and there were still slots available at the Birches. I'd heard there might be more behind, so I walked back to the store and decided to hitch for a time. If I didn't get a ride by such and such a time, then I would hike on. I think there would've been room, but then I was thinking about rain for the hitching day. I thumbed northwest which had less traffic and did that until I thought I should make a sign. I wrote "Kokadjo" on one side and "Monson, Greenville, or Kokadjo" on the other. That way, I could flip it based on which direction the traffic was headed. By this time it was about 2:30pm. A guy named "Chris" pulled over headed toward Millinocket and said he could take me that far. I accepted. Turns out he was filming American Loggers for the Discovery Channel, so we had plenty of things to share about being in the Maine North Woods. In Millinocket, I stopped in at the AT Lodge to say "Hello" to OleMan, and then went for a bite at the AT Cafe. Walked out of Millinocket a ways and was offered a ride to Milo, ME. I stopped in at Elaine's where she fed me a roast beef sandwich after letting me use the restroom even though the restaurant was closed, and we must have shared stories for a couple hours as customers came for ice cream. Alex picked me up in Milo and drove me as far as a store on Route 6/16. He was on his way to Sebec. It was either him or the ride from Millinocket to Milo who knew Chris and the American Logger crew. Another Alex picked me up from there and drove me as far as Guilford. It was almost 8pm at this point, but he dropped me off at the Mobil1 and Rite Aid when it was dark. I went into the Mobil1 for a potty break and broke out my sign again after getting back to the road. Lo and behold, another hiker was across the street waiting for a ride from Shaw's. We agreed to split the cost and I spent the night at Shaw's.