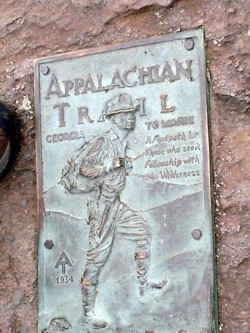 The "A.T.," as it's called by hikers, is much more than just a path through the woods. It is a national scenic trail, part of the same national park system that includes Yellowstone, Yosemite, and the Great Smoky Mountains. Its official name is the Appalachian National Scenic Trail. But, unlike those famous parks, it's not a concentrated preserve, with campgrounds and paths within its boundaries. As the longest, skinniest part of America's national park system, the A.T. stretches over 14 different states and passes through more than 60 federal, state, and local parks and forests. Hundreds of roads cross it. In some parts, the Trail "corridor" is only a few hundred feet wide.

In 1921, the Appalachian National Scenic Trail was simply an idea. Benton MacKaye proposed the idea of the Trail as the connecting element of a project in regional planning. The efforts of countless volunteers made that part of MacKaye's idea a reality. Today, the Appalachian Trail is best known as a simple footpath.

At a Glance - The Appalachian Trail, completed in 1937: