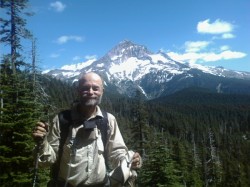 Getting Serious about the AT

My name is Brian Lewis, trail name (from the PCT) "Gadget", and I'll be attempting a north-bound thru-hike of the Appalachian Trail starting Feb 25th 2010.

I walked the Pacific Crest Trail (PCT) in 2008, and stayed mostly around home in 2009. It didn't seem reasonable to leave my wife alone two summers in a row! I was thinking of a 2010 CDT (Continental Divide Trail) attempt, but my wife has some travel plans (also hiking related) for the Fall of 2010, and I didn't reckon that I could fit in a CDT attempt along with any sort of Fall commitment. So I decided to try the Appalachian Trail (AT) instead in 2010. The "finish by early Fall" requirement dictated my starting date (a bit earlier than the average thru-hiker starts), with a rough goal of finishing by sometime in August. That perhaps gives me a couple of weeks to decompress back home before a bit more travel and some easier autumn hiking.

I have a couple of potentially serious issues to deal with to get back on trail, however. I have a couple of lingering foot issues from the PCT trip; I have to decide whether I want surgery on one foot and to basically immobilize the other (walking cast) while healing from the surgery. Catch here is that due to other schedule constraints I'm concerned that this would put me on trail in lousy physical condition. I know that a person can start the AT somewhat slowly, but I've also had some recent knee pain that I think was caused recently due to me trying to walk like a thru-hiker with a now-flabby city hiker's body. So I'd really rather be reasonably fit to start the AT, which is reputed to have steeper and generally poorer quality trail than the PCT.

The other issue of concern is an eye problem I've been dealing with for most of a year, called CRVO --- Central Retinal Vein Occlusion. Since December I've been in a medical study (human lab rat) where I get a monthly injection of the study drug into my right eye (and this is about as much fun as it sounds like). It's really helped, but literally just today I had recurrance of symptoms despite a recent injection. This can get better on it's own, or stabilize at a lower level of vision, or can get worse all the way to blindness --- no way to know. My other eye works fine, if slightly near sighted (wouldn't you know it, my 20/20 eye is the one with the problem ...). So hopefully I can get on the trail anyway.

The AT might not have been my first choice, but it should certainly be interesting, and a late Feb start adds a dash of adventure into the mix based on potential storms and temperatures that can occur in the Spring. I'll write up some additional "pre-trip" entries like this as I go along, listing mundania like how many resupply boxes I'm considering for the trip (currently 5), what kind of gear I anticipate bringing, etc etc. At some point I'll also move from "getting serious about" to either dropping the idea or buying a plane ticket! At this point, I do think the trip is likely enough that it makes sense to start this new journal for it.