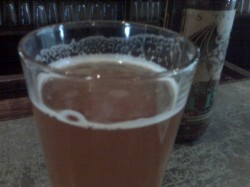 Well I got a call about a job and I decided to head back to the beach and see what happens. I left the NOC after not rafting, but got about 140 miles of hiking in. A nice lady took me to Bryson City after dropping off her daughter and grand daughter who were going horseback riding. Goo(her bulldog) sat on my lap for the 20min ride and was a fun topic for conversation. Once I got to Bryson City I had no idea what the next step was. There are no buses, trains or even taxis in the town. After poking around through some stores I got a coffee and a lucky break. Turns out the guy in front of me getting coffee was going to Asheville. Score!!! Got a free hour and a half ride to Asheville and walked 2 miles to the bus station. 65 dollars later I had a ticket for the bus leaving later that night. What to do, what to do? Well, I walked a few miles down the road to the mall and watched Clash of the Titans, ate McAllisters Deli and then had a couple beers at B-W's. Now what? More waiting. And waiting. And then the bus arrived late after more waiting. And when it arrived it was missing a wheel and could not leave the lot. More waiting.... 430am we finally leave. Only about 7 hours late, after waiting 8 for the bus. Good thing I'm a fairly patient person. The Marine Corps definately taught me to just smile and go with the flow. So here I am, in Raleigh.....waiting MORE. Fortunately Raleigh is home to one of the best state side bars called the Flying Saucer. Craft beer heaven, over 300 to choose from!? Well, I did walk downtown and wait till noon to get a beer. Anyways I should be at the beach sometime tonight.....should be. If the job doesn't pan out I may just be on the trail again soon. Until next time.....cheers to Greyhound, the shittiest company ever:)