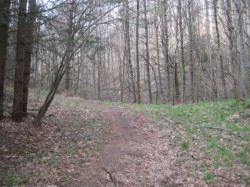 Trail to HWY to Elk Park

We packed up and headed out without cooking any breakfast. We were only 3 miles from Elk Park, NC so we thought we could wait and have a big breakfast there. We stopped at Apple House Shelter. There was a man there who said he was hiking home to PA. The only food he had was rice and fresh spinach he said he had gotten in town. He was wearing dress pants and boots 2 sizes too large. He did have a sleeping bag in the shelter and a small Jan sport backpack. Since Scott had finished up his hike he gave him what food he had left. The shelter is only mile from the road. I believe he was living in the shelter and bumming food from hikers, but I may have been wrong.
We hiked up the road toward Elk Park with no one willing to stop and pick us up. We stopped at the steakhouse mile up the road but it was closed. A young lady pulled in with her baby in the car. We asked where the nearest breakfast place was and she said 2 miles up the road we thanked her and I told her we had not had any luck getting a ride. She told us to wait a min. She went inside and came out and said a man in the grey Chevy truck would come out and give us a ride. He did and I offered to pay him but he would not accept anything.
He pulled into the Country House. Scott and I went inside with our packs and asked if it was ok to lay them on the floor. They said that was ok. There was a table across from us with about 8 seats and a sign over the table saying Liars Table.
We ordered the big breakfast of Bacon, Eggs, Gravy, Biscuits, Home fries, and Coffee. The food was great and my coffee cup never got empty until I told the girl I had had enough. The locals then asked us if were going to continue hiking. Scott explained he was going home and I was still hiking. They said that there was going to be 3 or 4 days of bad weather coming thru the area and there were tornado warning out. I thought about it a few min and told Scott that I was going home. He said he could drop me off in Knoxville on his way back home to KY. I went outside and found a spot where I had cell service and called my wife. I told her about the weather and that I was coming home. She was at our church picnic, but would get plane reservations for me online from Knoxville to Orlando.
I paid our check and we went next door to sit and wait for Scotts shuttle. There were 4 picnic tables there and a small walkup restaurant. I unpacked my pack and gave Scott everything I could not check as luggage on the plane. He will bring them to me at the family reunion in July in Kentucky this year.
Scott saw a group of hikers going into the Country House. I went over to see if I knew any of them. Smuck was there. I had met him at Uncle Johnnys. He and 4 others had just hiked in this morning.
He said that Valcore and Estero were supposed to be going or coming from the PO with a package for Valcore. Smuck said that they had also heard that they should stay in town until the weather blew over.
A local lady had offered the 5 of them her garage to sleep in until the weather was better. I told them that my spring hike had come to an end and I was heading home. I wished them all luck. James from Uncle Johnnys showed up to shuttle us back to Scotts truck at Uncle Johnnys.
We made it to UJs took showers and headed to Knoxville, TN. Scott dropped me off at the airport. My flight did not leave until 12noon on Sunday. I looked at the hotel board and called for a shuttle. Comfort Suite was the cheapest room and free shuttle. I shuttled over got a room another shower then to pizza hut in front of the motel for a dinner of salad and calzone.
There was not much on TV so I went to sleep early and woke up early for the free breakfast.
I had done this before going home on a plane from Atlanta in 2009. Scott and I stopped at a Wal- Mart on the way to Knoxville and I got a cheap roll of duct tape. I took my 55gal black plastic bag I use of a liner inside of my backpack and put my backpack inside of it. I then made a duct tape handle and taped it to one side of the bag. Then I just used most of the roll to tape round and round the backpack till it was secure.
I caught a shuttle to the airport, checked my bag, then thru security and onto the gate to load about 30 min. later. I seemed like no time at all and I was in Orlando and my beautiful wife was picking me up to take me home.
The End of my spring 2011 Hike.