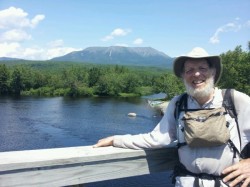 Today's goal was to reach The Birches, a pair of lean-to's reserved for long distance northbound hikers at the Katadyn Stream campground some 25 miles away. And just to make it a little more challenging I'd been hearing all of these horror sorties of the bogs and mud to come between this lean-to and the next one. So I was up really early and on the trail at 5:15 am. After crossing the river outside of the lean-to, thankfully on a bridge although it was a tad on the narrow and wobbly side. Soon afterwards the mud started. But to me it didn't live up to all the hype such as "a 14 mile mud pit". Yes it was probably more than I'd seen to date but it was no worse than bogs I'd already encountered. I actually made good time and kept my feet from being buried in mud, although I couldn't keep the boots dry. When I reached the campsite I originally hoped to get to last night, I was glad I didn't attempt to get here then. I wouldn't want to have rushed through all that mud and it was a lot easier today taking my time and working out strategies to get past each bog.

The trail took me up to Rainbow Ledges where there was supposed to be a views of Katadyn but all I saw were clouds. On the way down there was a short but heavy thunderstorm - I was already soaked from perspiration so the rain was quite refreshing. I'd already stopped for a couple of snack breaks so when I reached the next lean-to I didn't stop as a higher priority was calling. An hour or so later I came to the warning sign about the 100 Mile Wilderness saying that hikers should take at least ten days of food. I had a little chuckle since I had done it in just over four days - we thru hikers must be a hardy breed. It truly was a remote wilderness with only a few dirt roads and virtually no cell service - interesting isn't it that I define remoteness as my phone not connecting.

Soon after that sign, I reached Abol Bridge where there was a great view of Katadyn from the bridge. More importantly there is civilization here in the form of a store/deli. I got a big sub sandwich for lunch along with a large soda and four candy bars for tomorrow.

Supposedly the next ten miles was going to be a breeze but that story was somewhat embellished as well. It was a nice trail for the most part but it did have its obstacles including two rather fast and deep fords that were not mentioned in the guide. Much of the trail followed several rivers and on one of them there was a viewpoint for what is called Big Niagara Falls. Somewhere around here the miles to go dropped another digit - now just single figures.

I reached the campground just after 6:00 pm, checked in at the ranger station and paid my small camping fee. Interestingly, when I was in Harpers Ferry I was number 67 to go through the Appalachian Trail Conservancy and the ranger here told me I was number 35 to reach Katadyn. Looks like I overtook quite a few in this second half of the journey. She also told me there is one other hiker here and she has arranged to get a shuttle here for him tomorrow to get to the nearest town and she asked if I'd be interested. Of course I said, so it looks like I won't be hitchhiking out of here.