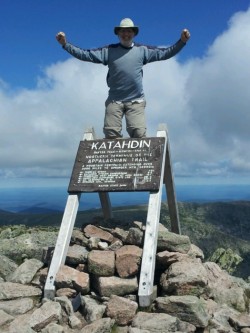 I did it! I finished the thru hike of the Appalachian Trail. What a wonderful feeling of relief, excitement and accomplishment. And what a thrilling finale it was as well.

Overnight I didn't sleep too well. I suspect I was thinking too much about the finish and probably worrying about how I was going to climb up a 4000 ft rock pile and probably more concerning how I was going to get back down. If you haven't detected it by now, rock scrambling isn't in my comfort zone, especially going down. By all the accounts from the southbound hikers it is a rock scramble for most of the way up to Baxter Peak which is the highest of several peaks on Mt. Katadyn and incidentally the highest point in Maine. But despite the lack of sleep I was pumped up and signed the trail register around 6:30 am. I had spurned the loaner day pack offered at the ranger station and since I hadn't slackpacked to this point I decided I was taking my pack and poles and all my gear with me. It had all come this far so it ought to see the finish.

The first mile and a half was a nice trail and quite easy although the gradient was starting to increase. Then I hit the boulder wall. The mountain has very steep sides and a fairly flat top and the sides are all boulders. I had my gloves handy and put them on at this point. They had been pretty useless for keeping my hands warm and dry, but they turned out to be very good at gripping the rock and avoiding me tearing up my hands. At this point, the poles were a hindrance as I had to keep putting them up on ledges so I could use both hands to get a good grip on the rocks. Some of the rocks posed some difficult challenges and there were several times that I devised a strategy and then found it wasn't going to work and had to start again. In places there were metal climbing aids embedded in the rock so I also had to figure out how to use them in the most effective way. Although each climb was tough I was making progress but all the time I was thinking "I got up this part, but I've no idea how I'm going to get down it".

After about two hours of this I reached the treeline but the rock scrambling didn't abate. There was a rather exposed ridgeline the trail went up and by now the wind had got quite strong so I stopped and pulled out my sweater to wear as I was starting to feel the cold.

The top of the ridgeline signified the start of the flatter section called the Tablelands. This was a lot easier - a little rocky in places but no scrambling on all fours. And then I was at the summit where I let out a loud cry of "I did it".

At the top I met up with Salty who I last saw in the hostel in Andover. He had climbed it with his wife and his sister. We congratulated and hugged each other for the accomplishment. My phone didn't work at all but Salty's sister had one that did and she graciously allowed me to use it and call Ann to let her know I was on the top of Katadyn. We all took lots of pictures for each other and I sent out a Spot message from the summit. The views were spectacular as the clouds that were swirling around as I climbed up had all disappeared. While I was having lunch, Mercury, the section hiker I shared the Birches with last night, also arrived. The AT goes up the Hunt Trail but there are about six other ways to climb to the top of Katadyn and by now there were more than twenty people milling around. It was also getting quite cold with the strong wind, so I decided it was time to start down.

Although there was quite some trepidation about the descent, I surprised myself and made good time. The wind made it a bit harder when I was above treeline but it wasn't an issue lower down. Most of the difficult sections I recognized the rock formation and remembered what I did to get up. Where possible I tried to repeat the path in reverse. Going down I could easily make larger steps than going up so it was possible to get to firm footholds, especially if I turned around and faced the mountain. There was one area I was really dreading but I got through it without any problems. And after about three and a half hours I was down and back at the campsite. Salty had offered both Mercury and I a ride to the town of Millinocket so I sat in the ranger office and had a really nice discussion with Betsy, the ranger on duty. I signed her register with a note saying it was a wonderful finale. I have to admit this was by far the most spectacular way to end a grueling thru hike.

We all piled into Salty's Subaru with the trunk overflowing and two packs strapped to the roof. We all stayed at the hostel and had a relaxing evening. Tomorrow I'll get the shuttle to Medway and then a bus to Bangor where I have a rental car booked. Mercury is doing the same thing and I invited him to join me for a drive through Acadia National Park. Then on Tuesday I'm going to drive up to the Canadian border and take the coastal route highway 1 all the way down to New York to catch my flight home to LA on Friday.

As I said before I started this trail I didn't have very high expectations because of the lack of views and the likelihood of a lot of rain. Other than the last two states, the lack of views made it a little monotonous. I just like to see the countryside I'm walking through but all I got to see was more and more trees. The few views I did see were all the same - hills covered with more trees. One of the attractions of getting out into these remote wilderness areas is that the only way to see what I'm seeing is to do what I'm doing. But on the AT, even that doesn't apply because anyone can get to anywhere on the trail on a day hike. I also thought the trail was really showing its age and although the wonderful volunteers are trying to make improvements, in my opinion it really needs a lot of work and investment to bring it back to the prestige of a National Scenic Trail. What surprised me about the trail was how different it was to the others I've hiked. At the beginning I called some of the tricky rock scrambles "gimmick rocks" but I began to realize the AT design philosophy was to make it more challenging by including features that make it more than a walking trail. I really did enjoy New Hampshire and Maine. They were an order of magnitude harder and every mile was hard to earn because it was such an obstacle course. But the rewards were well worth it with some wonderful vistas above treeline. And what more could I say about the finale other than it was a great thrill to end the hike that way. In total I'm counting the time taken as 109 1/2 days which divides into the 2184 miles to give an average of 20 miles per day. A lot of folks asked me whether it was harder than the PCT and my response has been yes from the waist down and the neck up. I've never had such sore knees and ankles before so on the legs it is very tough. From a cardio perspective, the higher altitude of the other trails makes climbing hills a lot harder, especially at my age. But I do think the AT is a tougher mental challenge. Looking at trees for miles on end can be a little monotonous. The harder part is the concentration required to make sure every step is going to be safe as you negotiate the obstacle course. That gets wearing hour after hour. I've never fallen as much while hiking, either from slipping on wet rocks or roots or from stumbling over an unseen rock or root. Although I had doubts when I started, my new lightweight gear stood up well to the trail, although the pack is pretty much shot. But the lighter weight of the gear and at least a day's less food made a big difference and I rarely noticed the pack and didn't need my hourly back breaks that I took with the heavier gear. I guess I'm now a convert to ultralight.

So what now? When I started I had this grandiose idea of doing the AT, taking a couple of weeks off and then going back to finish the last thousand or so miles of the CDT that I missed last year. But I need longer to recharge as I'm feeling rather beat up at the moment. So finishing the CDT is going to have to wait for another time. So this is the end of another adventure. I hope you have enjoyed reading this journal as much as I enjoyed writing it. And, thanks to all of you that sent messages of support and encouragement. They meant a lot to me. Stay tuned for another adventure in the future. Best regards.