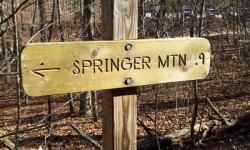 I slept in a little this morning. I had a very good nights sleep. When I passed the intersections of the AT with Benton MacKaye Trail (BMT) it brought back memories of the time John O and I hiked the BMT. R.I.P. John O. When I got to the summit I had it to myself for a long time. I had actually passed several people in the last .9 miles but some of them took a long time to reach the top. A cup of strong coffee to celebrate.

Since I was done so early I checked with my arranged shuttle for tomorrow and was able to move the appointment up to 5: or 6: this evening. Using Kayak app on Android I quickly located a booked a motel in Lawrence, GA. Extended stay. What a nice room with kitchen for $ 49 a night. I also bumped my car rental up to 10:,

After a while it got too crowded with all the people on top of the mountain. My plan or theme for this year was Solitude in the Wilderness. Well there is not really much of a wilderness but it does seem wilder if you make an little effort to avoid other humans. I did make some friends along the way and enjoyed chatting with folks I met during the day or mostly in towns. But it was very nice and peaceful to camp alone with nature. Ill have to count but I think I might have had as many as 90 zero days off between Febuary and November.

Ron Brown was my shuttle from Springer. He picked me up after his last scheduled shuttle for the day. They were late so it was 6:30 when he picked me up. Three girls followed us in their car as Ron lead them back to Amicalola state Park. Along the way they picked up an Owl with a broken wing. Ron was able to hand to bird over to one of the park officers for rehab. I think it was about 10: when I checked in my motel. I was beat. That is pretty late to stay up when you are used to sacking out before dark.