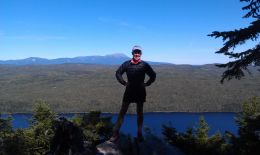 View of Katahdin from Mt Nesundabunt

I finished the AT 12 days ago and I've been home for a week. My last post
ended with "more later" If I'm ever going to finish up my journal the
time is now!

The 100 Mile Wilderness was a nice prelude to the end of the trail. I
planned way more days than I needed. It rained in Monson on Monday, my
first zero there. It rained again in the evening the next day. It rained a lot.
6-8 inches. I checked the weather forecasts so many times it was
ridiculous. I had a few days to play with so I could have stayed in town
another day. I wanted to hike and it looked like the weather was changing
for the better. So I left town. Yay!

The trail was a sloppy mess when I entered the Wilderness. I tried to keep
my feet dry and avoid the puddles and mud. That quickly became
impossible. I had to ford a few streams and luckily all those went well.
I got my feet wet the first couple of days but then all the fords were
either rock hops or easy enough that I could take my shoes off and wade
across barefoot. B-Line, Barbarosa, Carbon and I all had the same plan for
how many days we wanted to spend in the Wilderness. We weren't hiking many
miles a day. Even with taking lots of breaks we would get to the shelters
with lots of daylight left. I know I could have made writing my journal a
priority but it was way more fun to just sit around and talk.

The first day I saw Pacemaker and Runner Up but they were on a mission to
finish before their visas expired so they went on ahead. The first 2
nights Strawberry Donut and Whistle joined us in the shelter. At about 5
am we sang happy birthday to Strawberry Donut with a candle stuck into an
instant oatmeal packet serving as the cake. Several times I crossed paths
with Tru and her dog. Quite a few section hikers were out and I enjoyed
talking to them also. I felt pretty lucky to get a decent or great view of
Katahdin every time there was an opportunity. Some of the days were
absolutely gorgeous. It made for nice long breaks sitting in the sun.

The first half of the wilderness was quite up and down but still the
10 miles or so I hiked didnt take very long. It started to drive me crazy
to go at so slow of a pace. I got to Antlers campground around late lunch
time. It was one of the most beautiful campsites on the whole trail. It
was on a peninsula on a gorgeous lake. The original plan was to camp there
and get a great sunset and sunrise. I just couldn't stop that early. And
besides it was extremely windy and looked like it was going to rain.
B-Line stopped anyway and was rewarded with dry beauty. Oh well. I still
slept well in the next shelter and Carbon and Barbarosa joined me.

I'm not really sure why the AT has made me not want to sleep in my tent.
The shelters are so much easier (like cowboy camping) and more social
also. The last time I slept in my tent was at Osgood Campsite in the White
Mountains of New Hampshire. A bit ridiculous, I know.

It felt so good to finally hike on easy terrain. The second half of the
Wilderness is some of the easiest hiking of the entire AT. No rocks, fewer
roots and flat! No way could I only hike 10 miles in this. No one else
could either. The four of us plus Tru, Slow & Steady, Quahog and Oreo, and Legolus got
to Abol Bridge a day early. Abol Bridge is out of the wilderness and just
on the edge of Baxter State Park which is the home of Mt Katahdin and the
end of the AT. There is a beautiful view of Katahdin from the bridge and on
the other side of the bridge is a store and restaurant. Every AT hiker
looks forward to pigging out at the grill. But when I got there B-Line
said there was good news and bad news. The good news was that he handed me
a beer. The bad news was that the restaurant was closed and the store had
no electricity. We all wanted to charge our cameras/phones. And we wanted
to eat real food. And we had an extra day. All of us except Quahog and
Oreo anyway. They were right on time for their summit plans. The road in
front of the store doesnt get much traffic but luckily Mama was there with
her car. She had started out as a thru hiker and then bought a Subaru
station wagon in New Hampshire and was now joining friends along the
trail. She was going our way and agreed to let us pile in. In the back
seat we fit 4 hikers plus her dog!

Even though I didn't originally want to go into town before I climbed
Katahdin it worked out great. Just like everything does on the trail. We
drove into Millinocket and checked into the Appalachian Trail Lodge and
Hostel run by former hikers. I got to see so many hikers who
already summitted and were about to go home. I would have never seen them
if I had stuck to Plan A. Handstand was there taking one last zero after
getting to summit on one of the most beautiful days of the whole summer.
Later Pacemaker and Runner Up came down from the mountain excited about
having finished the trail. Runner Up especially was beaming. They had
gotten engaged on top! I talked to Slim Jim who also got to summit on the
beautiful day and was in the area with his wife for several days.

And then I started my almost obsessive checking of the weather forecasts.
It wasnt looking good. Rain was predicted every day until Saturday or
Sunday. I got to town on Tuesday and wanted to finish on Friday. The
front was stalling. Tuesday, Wednesday and Thursday the forecast was for
rain. Hikers would come back down very excited about finishing and didnt
get rained on. It just rained at night. They didnt get to see much but
they were still very excited to have finished.

I still had 10 miles to hike from Abol Bridge to the base of Katahdin. I
did that on Wednesday which seemed to have the better forecast. I hiked
the whole way with Legolus. It was sunny and beautiful at the lower
elevations where we were hiking. We had 2 fords which I did barefoot but
the water was up to my thighs. I checked in at the ranger station and was
thru hiker #366. There are two lean-tos here. They are called The Birches
and are reserved for thru hikers who can stay the one night before they
hike up Katahdin. The ranger said that since I was going back into town at
the end of the day (it was Wednesday and I wasnt going to summit until
Friday) that I was no longer considered a thru hiker but a day hiker and I
couldn't come back the next day and stay there. I almost cried. My sister
was meeting me on Thursday and she had a campsite reserved. I could stay
with her but my vision of the end had me sleeping with a bunch of other
thru hikers in the shelter. In the end it didn't make any difference and
worked out great. Which it always does on the trail. Always.

Anyway I got a ride back to Millinocket with Legolus and his wife. I got
to eat dinner with more hikers who were in town.

Thursday was the day that the worst weather was expected. At this point I
only had 5.1 miles left to the top of Katahdin and the finish of the AT.
But was i ever going to get to do it?

My sister flew from Seattle to Boston and drove up to meet me. By the time
she got to Millinocket it was too late to drive out to the park and camp.
So we stayed at the AT Lodge. Another night in a bed didn't seem like such
a bad idea. Plus I got to see more people in town. Jet Lag, Mother
Teresa, Peaches plus more. It poured rain all night and I didn't sleep very
well. I was excited to finish but also questioned if I should really go up
the next day. I think the Californian in me thinks one can time the
weather. Ha!

The end is next. So once again more later