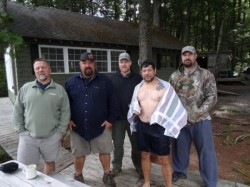 Day 192 - This is the last day of the hike and it is hard to believe. The plan was for Ben and Scott to drop a truck at Roaring Brook Campground and then meet me at the trail head of the AT Katahdin trail at Katahdin Stream Campground between 8-8:30. Turtle and I waited until about 9 and no one showed up.
We finally decided to head up without waiting any longer. The trail up Katahdin was difficult and we were glad that we used a couple of loaner day packs from the ranger station. It was a beautiful day and a great day for a hike. It took about 3-1/2 hours to get to Baxter Peak, the northern terminus of the AT.
I had one important task at the top and that was to make sure that my friend Kirby's ashes taken care of. He and I had been hiking together since Bennington, VT. I read a poem written by Kirby's grandfather that was titled "Mount Katahdin" and then drank a Baxter Stowawy IPA, and listened to a tune before saying goodbye and spreading his ashes in the 13 foot rock pile on the peak that makes Katahdin one mile high. It was tough to leave my best hiking partner but it was the plan for his journey. He is also part of many other peaks on the AT in ME.
We had been on the peak for an hour getting our pictures and celebrating with other thru hikers when we decided it was time to head down, across the Knife Edge. I checked my phone and called Sue since I had service. I had a message from Ben saying they were coming up Catedral Trail, the toughest trail to the top, and would see me at the rock pile. We couldn't wait and head out across the Knife Edge.
The hike across the Knife Edge was spectacular and worth the effort. What a route to get off the mountain! We took the Helon Taylor Trail to Roaring Brook. Still didn't know what was going on exactly with Ben and Scott. When we got to Roaring Brook at 5:30 we found Scott's truck. It had a cooler with beer and a couple of sandwiches! It was starting to cool quite a bit and with the sweat we worked up on the way down it was a job to stay warm. I had all my clothes on including my rain gear.
At 6:15 Naffles showed up but still no sign of Scott and Ben and friends. It was getting dark.
Scott and Derek got to the truck around 7:45. They didn't make it to Katahdin Stream because Ben had a load of wood in his truck and Baxter Park does not allow wood from outside the park. Ben had to park his truck outside the park.
Ben, Nate and Dave showed up at the truck at 8:45. I had never seen Ben so worn out. All 3 were tired and cold so it was decided to take them to the truck outside the park and get them headed home for rest and to get warm. When we got to the parking spot the truck wasn't there! A ranger was there and we got the rest of the story.
Ben had parked his truck in a helicopter landing zone. We had been watching a helicopter while we were on top of the mountain all day. The helicopter needed to land and they didn't want to sand blast the truck's paint job or possibly blow the window out so they called a tow truck to haul it away. Now it is 10pm and we need to get Ben's truck. The ranger offered to take me and the other 2 hikers to Katahdin Stream to get our packs and return the loaner packs. We had spent the last hour in the back of a pick up and on the way back after picking up our packs we were talking about getting our sleeping bags out to stay warm while waiting for Scott. To our surprise Scott was there when we got to the landing zone. He had stopped and got Jimmy to take Ben to Medway to get his truck.
We gassed up in Millinocket and got something to eat before heading for Schoodic Lake. We got to camp after 1:00am and the final day of the journey was over. Definitely a memorable end to the journey.
I have to give Ben, Scott and friends a lot of credit for hiking to the top of Katahdin. It took a lot of determination.