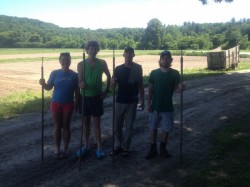 Scrabbling Time... It's the White's

It's way past hiker midnight... 9 pm... As I write this. But, goodness an update here is overdue. Right now, Deer Dog and I find ourselves sharing a bunk bed in a private room at the beautiful Highland Center resort. We're at Crawford Notch on the AT, about 15 miles from the famous Mt. Washington in New Hampshire. Deer Dog spent an evening giving a speech on thru hiking at the Galehead Hut. She made stabs at the lack of trail magic experienced up north in comparison to the south. With feathers ruffled, a gal from the crowd named Jane decided to do something about that. She caught Deer Dog after her speech and welcomed her to take an unfilled spot of her 25 person group reservation at the Highland Center including dinner, breakfast, a nights rest, and shower. Fast forward to the next day on trail, I finally caught Deer Dog after chasing her down for the last 4 days. Big hugs and howdy doo dees ensued. I planned to snag a room in the Highland center bunkhouse in order to take on Mt. Washington with her Tuesday after a major wash out Monday. We got to US 302, hitched to the center, was greeted by Jane and a room that could fit two... Along with grub reservations galore for the both of us. The North's just showing off magic wise now....

Previously on the AT... NADO, a PCT alumni from 2014, came out and did some amazing magic for the groupies. Meeting us at the road into Manchester Center, she had fresh strawberry shortcakes straight from the farm for all 5 of us that showed up. Seeing her face again made me jump for joy! We all spent the afternoon resupplying, eating food, eating more food, and going to gear stores before hitting the trail again. Her and I oodled and awwed over her Continental Divide Trail Guide Book, making plans and getting giddy. CDT 2016! I left my shoes in a parking spot in the town center... Like back in Harpers Ferry... But again got them back an hour or two later. Phew! You'd think those would be the one thing I'd never forget?...

In an effort to catch all the groupies, that have been charismatic parts of this wild journey, a week filled with zero's and southbound slack packing ensued. 400 miles left to catch all the trail family ain't nothing! A buddy named Sunshine and I headed into Rutland VT for a resupply and nero day. We said tootles to the constant comrades Dopey and Stealth that morning, who were still loaded with food... and had made plans to meet a friend of Dopey's from home for a short 5 mile day. We promised to... and had full intentions of... see each other within a day or two at the most, a quick game of catch up. That was before we knew that Rutland is the ultimate vortex.

Have you ever heard of a Yellow Deli? The one in Rutland is both a restaurant and hostel. Light pied piper Renaissance Fair music plays at the door steps as you walk up. The restaurant has rich mood lighting, many a hand carved table, chair, and beam, hand tanned leather accents, and Amish like people scampering about as your servers. They serve breakfast, lunch, and dinner 24 hours a day from their homegrown menu. After a run through of the hostel from Hebrew named Aysh, Sunshine and I took full advantage of their deli fare... Mmmm butter and maple syrup soaked waffles. We kept pinching ourselves wondering if this place was real.

The catch, this place was incredible but strange. It's run by a Commune... Ity called the 12 Tribes. We've heard they've been in the paper recently over in Germany? If you're not careful they'll suck you in forever at the Deli, with event after event and no charge to stay.... Be careful drinking all the delicious Mate they throw your way. It's just too good! Chris, a guy who was hiking the Long Trail with a buddy, had stopped there for a break a week before we arrived. He wasn't leaving... Ever. We swore, it was the mate... Messing with his brain.

3 days with these people and we had gotten one of the most refreshing and interesting breaks from the trail. We got to go to their 150 acre organic farm and hoe butternut squash, swim in the river, see a gathering, play ultimate frisbee with the early 20's crowd, and learn about their religious culture. We met a couple considering marriage, a previous hiker and a community member whom caught her eye in the Deli 4 years before, Talidah and Zerah. We sat down many a time at their table, ate their delicious farm fresh foods, and swapped all sorts of curious conversation.

Sunshine and I did a 17.5 mile slack pack southbound on our last day at the Deli, swearing we'd actually leave the next morning. The slack pack, suggested by new buddies sly mister Bobcat and genuine Good People, gave us a chance to catch surprised and familiar faces... Chef, Jimmy Jam, Sling Shot, Lorax, Archangel, and more. Success! The next morning we actually left. Phew! They almost snagged us once again with suggestion of staying for their Sabbath and learning Israeli dancing while feasting with them. Holy crow!

Sunshine and I spent maybe 2 days hiking... Jumped off a 30 foot high bridge in front of trail angel Randy and Linda's house. Splash! Hiked butt naked on national Hike Naked Day with Code Red and Tree Ninja the last 7 miles to Hanover NH. Hanover became another serious votex when we ran into my crew from the very beginning of the trail, the Rhode Island Express. We amassed in a beautiful farm house on the outskirts of town thanks to Frodo. One night there and Sunshine, Tree Ninja, Code Red, and a new buddy Frost took off for the trail thanks to shuttle angel Ted. The RIE and I stuck around to chill for another zero day, meet Chef's girlfriend Cody, and get two days of slack packing in. As always... we cooked like Kings and Queens making colorful salads, lasagna, and fine cuts of meat. We fancied it up at the farm house playing suit and tie and summer dress croquet across the sprawling lawn. Again it seemed like a strange and beautiful dream. This is hiking? Such a trip being with these men again.

Then came the beginning of The Whites... Mountains that have now bore in me a major respect for east coast hiking. Hiking is an understatement though, we no longer walk... It's all purely rock climbing enough said. We... Cruise, Lonely, Luke Trail Walker, Bosstrich and I... mentally prepared at the hikers welcome hostel. There we met Legion who was running the hostel, a AT alumni, and a PCT 2012 alum too. He and I swapped stories like crazy... The Anderson's, the Saufley's. It was a trip down memory lane. The Hiker Yearbook guys, Odie and Nema, were also magically there. I met these guys on our first day in Amicalola State Park down in Gorgia. Reunion!! Off from the hostel, our first White Mountain rang true... Moosilauke! The South side of this mountain is the steepest and longest decent of the entire trail. Make it up and successfully down this mountain and you can conquer anything out here. Wam bamb thank you mam!

Mmkay, last notes here before wrapping this thing up. Thank God for Ann at the Autumn Breeze Motor Inn. Her magic and hospitality was thru the roof on an awkward... Road closed and no cars to hitch from... Necessary resupply day. Franconia Ridge nearly brought me to tears as it broke tree line and brought me back to endless views... Reminiscent of the PCT. Ran into some of my childhood best buds buddies up at Zealand hut in the Whites. Julia Hanowell you're making connections for us all across these wilds! Fun to make your ears burn swapping stories with your college buds.

Mmkay, now into town with Deer Dog to wait out the weather before we tromp up Mt. Washington tomorrow. Beer, Pizza, and Harry Potter here we come.

It's a good life,
LT

Powered by: the brother, and a whole crew of PCT 2014 Alumni. GYPSY TOWN REP!