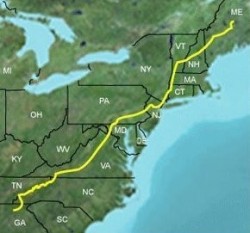 5 days until I begin hiking the Appalachian Trail (AT). My bags have yet to be packed, but that will come soon enough.

A little background. After graduating from Clemson University in May 2015, I've decided to take this time to thru-hike the AT. Immediately following graduation, I thru-hiked the Foothills Trail which is an approximately 80-mile long trail through the Blue Ridge escarpments and foothills of South Carolina where I was able to test/tune my gear (and to enjoy/experience the bountiful mountain laurel blooms, of course).

Most people hike northbound (start in Georgia) and start in March/April. Since I graduated in May, I chose not to go north as this would have put me on a tight schedule as Baxter State Park (northern terminus of the AT) closes on October 15. And being one not to shy from going against the mainstream and wanting to hike one direction (read no flip-flopping), I chose to hike southbound (start in Maine). Baxter State Park doesn't open for overnight camping until June so that already gave me some time to get ready after graduation. After hearing of the huge swarms of black flies and swollen streams due to snow melt that occur in the northeast during May/June, I decided to wait until July to start my hike and hopefully skirt the worst of it. I hope to finish sometime within the first week or two of December.

Disclaimer: I have never been much of a journaler so I will try my best to keep updating/adding entries throughout my journey.

The Appalachian Trail (A.T.) is approximately 2,189-mile long footpath stretching through 14 states from Maine to Georgia. Conceived in 1921 by Benton MacKaye as a refuge for city-dwellers, the A.T. was first completed in 1937 and traverses the wild, scenic, wooded, pastoral, and culturally significant lands of the Appalachian Mountains.