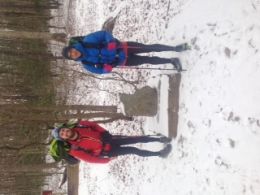 Arrived to Amicalola Falls State Park around 9am or so. Had a little confusion as to where the approach trail was. After some discussion we realized where we needed to be. Had our pictures taken and we're off around 10:00. The approach trail was snow covered and icy, but everything was so beautiful. The falls were just spectacular and very impressive. Hiked up the infamous stairs and kept going only breaking once every 30-45 minutes or so. Didn't really have "lunch", but we have found eating a little something each time we stop for water is the ticket. Met a few day hikers, and thru hikers Exodus, Pete, and Ironman Bill. Met them around the trail to Hike Inn. Soon after we were on an exposed side of the mountain with very strong (and very cold) wind gusts. Put on more layers and continued. It should be noted that the ice covered trees and rododendron are also spectacular and add something to the trail that I believe most don't get to see. The last haul up spring to the summit was tough going. Had some minor cramps but in the end we made it. Yoyo signed the trail register "Yoyo and Tweet made it here despite the snow." Trues for cell service but none was to be found so we moved onward to our descent toward our shelter for the night, Stover Creek Shelter. Made it and met thru hiker "Nazi Surfer..." Set up sleeping bags, filtered watered, and decided it was time for dinner around 4:30! We were both so hungry, but after cooking could only down a bit. Hung food bags with bear cables as night began to fall. Should have some rain tonight, we'll see how it all plays out. All in all a wonderful first day on the AT. I am already sore, but hopefully nothing vitamin I won't fix. Haven't been too cold yet. Let's hope it's a good sign about my gear. Tomorrow it's off to Gooch Mountain Shelter if we feel up to it. I miss my beautiful wife and Yoyo his wonderful girlfriend. Tomorrow we also hope to track down a bit of service along the way.