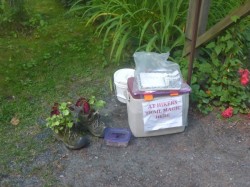 I woke up a little after 6:00 in and went to put on my hiking clothes when I realized that they were still soaking wet from the night before. I decided that I wasn't in the mood to put them on, so I took down my tent, hung my clothes on the clothesline in the shelter, and set up my sleeping bag in the shelter. Mowgli left early like he wanted to originally, and I slept for quite a while and talked to the people who would stop by when they would wake me opening up their packs to get out their water bottles and filtration systems. It got to about 10:45 when I thought that I had slept enough. I packed up and got out of there by 11:30.

I found out that sleeping in wasn't all that bad. It made it so I could use all of my energy over a shorter period of time. I didn't stop that much and before I knew it I was on Elm Street in Norwich, Vermont. On the way down I spotted a cooler and on it said TRAIL MAGIC! I ran over and grabbed some cold wastermelon slices inside and continued on.

I finally saw what was the connecticut bridge which was much more extravagant than I thought it would be. It had large balls on the sides of it and was much longer than I thought. The river was very wide and very calm. I figured that it would be moving rapidly and not at such a slow pace.

I got lost a little bit, and missed the turn on the main street. I turned around and passed by the Hanover Inn which seemed to be quite high class considering that there was a valet shuttling sports cars into an underground garage. Yeah, I sure got some interesting looks when I passed by since I looked so rugged and unhygienic.

I finally found my way again and stopped by a subway and bought two footlong sandwiches. One for right then and one for that night, hopefully to share with someone. I continued down the roads of hanover and came to a point where I knew I had gone too far on one of them. I had gone about a quarter of a mile too far and turned around but couldn't find my way back. I eventually found a knocked over cardboard sign that said "AT this way" on it with an arrow. Hanover was a little confusing to navigate through that day.