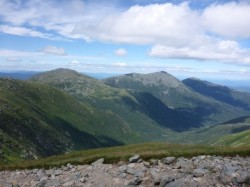 Looking down the ridge at Mt. Jefferson, Adams, then Madison

My Most Beautiful Hiking Day

I had to hike 3 miles down to crawford notch by 8:30 so that I could catch a shuttle to the Ammonoosuc Ravine forest service parking lot. The miles were easy, just going downhill and on some road. I got up nice and early, taking my time and sparking conversations with the day hikers passing by, or some of the SOBOs. When I got down to the notch there was a cooler and a plastic bin with "TRAIL MAGIC!!!" on the side, so I enjoyed some cheetos and pepsi while I waited for the shuttle. When the shuttle arrived they asked me for my name so that they could confirm my reservation. My mother said that she would handle that, but apparently when she called the night before the offices had closed much earlier than usual. I had to stop and switch buses at the Highland Center which was the next stop for the bus. I worked things out with the front desk and I could still get a ride up to the Ammonoosuc Ravine. I made sure to owe them a good tip for the inconvenience.

It took me an hour and a half to cover the three miles up the steep Ammonoosuc Ravine, all the way up to the Lakes of the Clouds Hut. Once I got there I recognized two hikers there, two thru hikers. It was Ounce and Gram! I saw them weeks ago back at the Velvet Rocks shelter just outside of Hanover. I was a little confused because I had taken 8 days off for the vacation. Well it turns out that Ounce's father had gotten sick and they took a week off to go down south so that they could check up on him. I'm glad that he turned out ok. Ounce and Gram also happened to get off on the same road that I did, Rt. 25.

After a quick stop at the hut and a talk with Ounce and Gram I continued up to Mt. Washington. I grabbed a couple slices of pizza in the restaurant as well as some ice cream and some chocolate milk. I went further down the ridge and over the Mt. Clay loop, which is technically off of the AT but I wanted to explore the summit so that I can see it for myself (that's the reason why we're on the trail in the first place). I got a fantastic view of the Great Gulf from up there, then I pushed on to Mt. Jefferson. When I summited Jefferson I began talking to someone about hiking around the Whites. While we talked the conversation led to the 48 4000 footers. I told him that Jefferson was my second to last one, and that Adams would be the last in about an hour. He told me to take in the view from Jefferson because he thought that the view from Adams literally sucks. I was taken aback from that statement especially when he was saying it right before I would finish a trek I have worked so long for. I connnected it with some of the other pessimistic opinions of the Whites that he had. I got a good idea of the hiking that he had done in the Whites and the fact that he seems rather displeased of all of the hikes that he has been on. From that I was about to ask him, "well why the hell are you up here then?" but figured that it would be best to keep that out of the conversation.

It was a pretty calm and quite scenic walk up to Mt. Adams. All of a sudden I saw a trail junciton and one of the signs said "Mt. Adams .2" with an arrow right next to it. I started to pick up my pace, and you could say that the summit of Mt. Adams would not be the best place to do that because of all of the loose rocks and ankle breakers. I slipped on one or two of those on the way up and I think that I bent one of my poles just a little bit more, but I got to the summit and while my lungs tried to resist any sound to be produced from my parched throat I was able to yell out "48!" I didn't realize that there were two women sitting near by, who got up and congratulated me for my awesome new feat. I turned back at Washington and Jefferson and I was glad to say that it was the most incredible thing that I ever saw. The sun shadowed the Great Gulf but I could see a relfection of one of the cliffs lining the Gulf in a pond that was sitting far below Washington. That pond seemed to be the center of this small ring of mountains. I looked at the rocky slopes of Jefferson and Washington and admired the setting of light on the Northeastern side of each of the mountains in my sight. It was my new favorite mountain, the best view that I had ever seen, and I couldn't believe what the man I was talking to earlier was thinking and I know that he wasn't being sarcastic.

I went down to the Madison Spring Hut and there was a spot open for a work for stay position, where you get to eat the leftover food served to the people staying in the hut, then complete a job given to you by one of the hut staff such as sweeping or cleaning dishes. The work isn't too difficult and you get to eat AS MUCH FOOD AS YOU WANT AND IT IS ABSOLUTELY DELICIOUS!!! We had another incredible sunset that night, and I enjoyed talking to a SOBO who I was working with that night. It still hadn't hit me how great of a challenge I had just accomplished, not just the 48s, but for all of the hiking that I had done that summer.