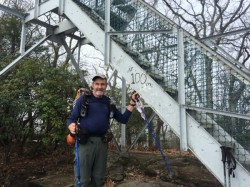 Again, sleep is elusive because of two problems: as a side sleeper I have trouble maintaining my spot on the Thermarest pad because of the sleeping bag sliding on the incline. Then, also as a side-sleeper, I have to have my pillow! I had modified a pillow case, adding an air bladder from an old pillow, with pilow padding on the side of the pillow with the semi-fleece cover. That system needs some work planned for the upcoming zero at home (I live 2.5 hrs. From the trail at this point!). Everything was packed up by 7:40am, ready to tackle the fabled Albert Mountain fire tower trail!
In passing Betty Creek campsite, I was told that just about every tent site imagineable had been used the night before! Trail magic in the form of apples, oranges, coffee, orange juice, pineapple chunks, and homemade cookies was waiting! Bearpen Gap was crossed at 10:20am, then the fun started! For the last 500 feet or so of this portion of the trail, it is literally climbing "straight up" using trees and rocks as handholds! The white blazes were easy to follow, but the legs were complaining about the big steps necessary to get up. Because of the misty fog blowing through, there would be no views over the ridges, but the sight of that "100-mile" written on the firetower leg was enough!
The trail down was very decent and we were able to make good time. By the way, there is a bypass road around the summit to be used during bad weather days, and several hikers were noted to be taking advantage of this! Because we were making such good time, several of us decided to go for broke and try to go all the way to Winding Stairs Gap today, rather than stopping at Rock Gap Shelter. That would make it a 16-mile day! The trail made us pay for that decision, as the climb over ?Wallace Mountain, between Wallace Gap and Winding Stairs Gap, was a challenge! It was beautiful, though, with so many changes of scenery in that three mile stretch.
I arrived at the Gap at 3:30pm, and soon had Enterprise coming to pick me up. The city bus shuttle also came by, with a $ 3 per head charge to get into town. I think Franklin is doing its part to help out the hiker community.
The plan for the weekend is take a couple of zeros at home, and drive back to this point on Monday, April 3. From here the targets are Fontana Dam, and completing the Smokies portion, hopefully without being snowed on!

Witchdoctor
"If your dreams do not scare you, they are not big enough"
Ellen Johnson Sirleaf