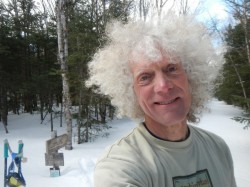 Time for another Thru-Hike

It's time to hiike a gain and I can't wait. With a lot of luck, this thruhike of the AT will complete my double-triple corwn. It never occured to me 13 years ago when I set out on my first thru of the AT that it would lead to this. I knew that some folks hike the AT more than once but that surely wouldn't be me. That was nuts! Then I got to Maine and realized the hike would end. It had become a way of life and a good one. My thoughts turned to gettng to Katadin, turning around and hiking back home to NH but there wsn't time due to my obligations to set desing and the next theatrical producing at Gilford HS. Then I thought, hike the AT again next summer but that seemed silly. Some folks had mentioned the Pacific Crest Trail. I didn't know anything about it but that would be my next quest.

Well, I hiked the PCT in 2007 and due to some unexpected cercomstances, again in 2008. In 2010 it was the Continental Divide Trail but altitude sickness in the Wind River Range of Wyoming stopped me after 1500 miles. 2011 saw the compleation of the norhtern half of the CDT. 2012 and 2013 saw me back at Griswold Scout Reservation runing the Voyageurs tkaking teenagers on week long backpacking trips for 8 consecutive weeks each summer. Somehow in 2013 I also hiked the 730 mile Grand Enchantment Trail, Awesome! 2014, 2015 & 2016 meant a second hike of the CDT. And now for a 2nd time round on the AT.

Now I get to see how the AT really compares to the other 2. They are all very different for sure. There are no favorites in my mind. The each have their own wonderfule aspect and their own chalenges. The AT has perhaps had a special place in my mind because it was first. So now there will be a look in retrospect. This will be fun.

One of my biggest concerns is the number of people pn the trail. In 2010 on the CDT in New Mexico for 30 days over 650 miles, I met 8 other hkers on the trail. On the GET in 2013 there were 4 other thru-hikers on the trail and they were all 4 weeks ahead of me. In 2014 there were lost more people on the CDT but still that was only about 200. Seeing other hiers was rare and somethig worth celebrating. I have become quite accustomed to solitude on the trail. That is not to say that I don't enjoy some company. I just wonder how I will adapt to hiking with about 3000 others. Of course the vast majority will have started well ahead of me. By thie time I catch up they will likely be well dispersed.

"The road ahead leads ever on,
down from my door where it began
to where many paths and errand meet."
Bilbo & Frodo - J.R.R. Tolkien
Photos link https://goo.gl/photos/huo8S7z8TC9LnKLV7
Photos after 6/5/2017:https://photos.google.com/share/AF1QipNtguhKas4oHgDuU9CynnLeDiIgTSFIC522-6vuM-0ftFyN5L-x-llE9qeeWfgzBA?key=dlJKZnJyVFBxUUdMdEVYai1HRXBndmFJRTE1UDFB
All Voice Journals: https://drive.google.com/open?id=0B7dpHA5Y88cEbkd4d1liQ2E2TEk
See my other journals at www.spiddington.com"