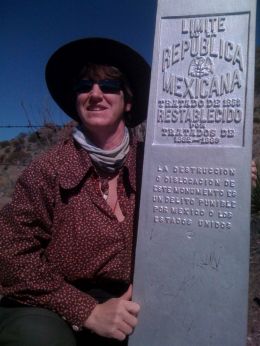 Jellybean at the Mexico border

Epic first day ends in emergency snow camp! Are we crazy? We're on a cliff edge. Dug out a not so flat 3ft space to put up one rainbow tent for three hikers! Digging down the snow on one side and building up the other. It's so cold the water bottles are already freezing and the sun is still up. Barely. But what a beautiful sunset on our first night and the hike. Oh my goodness. So incredible! The snow on Miller peak is a foot of fresh powder over another foot of soft drift. The trees are frozen with four inches of rhine ice. So obviously we didn't quite make it to camp. Mostly cause we were taking so many photos. Wish I could upload the real ones. You just get the phone version. We have to hike down hill 1.9 miles to the border. Took our photos on the Mexico side of the barbed wire fence by monument 102. Shrievie joined us for this leg. Evie picked up litter from the illegals on the way back. There really wasn't as much as I expected. Full jugs of water were in black plastic bags. I assumed it was to keep them from freezing. Border patrol has huge contraptions on their trucks with cameras and probably lots of other security devices. We left shorty and shrievie back at Monteza pass and began a steep climb up to miller peak at 9000 ft. A 5000 ft climb for the day and were wearing all our clothes hats and thick gloves. We passed a couple mine shafts and some welders sealing them off. Then we entered a winter wonderland. Complete with fresh cougar tracks! But worth it all! Really just spectacular views and with the pristine new fallen snow. Just amazing! On the down side of miller we lost the trail and started using a compass bearing. The drifts got deeper and the sun went behind the ridge. The tempature plummeted to 16 degrees. Water bottles were freezing. Feet were freezing. We decided to make camp. But where? One barely level widspot on the lee of the ridge. Evie pitched his freestanding rainbow backed up by nancy's snow pegs. I slept half in half out of the tent. Shivering for the first hour. Then taking off one coat putting it over my lowerhalf and added a pair of socks. That helped. Keeping my bladder empty is supposed to help too. At midnight I got up to pee and checked my watch for the temp. It was set in celcius and I spent the next hour trying to reinvent the conversion factor. By my midnight math I came up with 16 degrees fahrenheit. Funny thing is...it got warmer throughout the night. First 20 degrees then 24 degrees. But at least I was thinking clearly...ugh hum.. So be careful what you wish for. My epic start came true more than I could have hoped or even cared for!