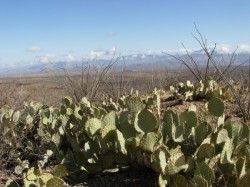 The day was fresh and clear after the storm last night. I wasn't looking forward to hiking within eyeshot of increasingly prevalent houses and crossing two major highways, but take it one step at a time.

The GPS route I had downloaded from the AZT website and placed on a topo map I printed out for crossing Hwy 83 did not reflect the new detour to cross in a small tunnel under the highway. But it was well marked on the ground, so the crossing was uneventful. Four slogging miles later I crossed under Hwy 10 in the spooky subterranean tube. But soon I could see the band of bright green to the north that indicated La Cienega and good water. The weather was very mild after the storm passing--resting in the shade was almost too cool for comfort.

I had a strange wildlife encounter--a jackrabbit didn't react to my passing on the trail a scant 20 feet from him. I thought that maybe it was ill, but it seemed ok when it hopped a few feet away. I found out later that the grade B horror movie "The Night of the Lepus" was shot at Colossal Cave--something about demented jackrabbits that terrorized humans after suffering from the results of a failed experiment. I will have to rent that one on Netflix.

I past up the water at La Cienega, although it looked like a great shady green oasis to hang out in, I wanted to make it to a camp in Colossal Cave Park. The landscape was becoming more iconically Arizona after I saw the first Saguaros and palo verdes on the trail north of La Cienega. Hiking up to a saddle before the descent into La Posta Quemada Ranch in Colossal Cave Park you could see a bizarre structure on a ridge to the east that looked like a setting from a James Bond movie--part Tibetan Buddhist monastery and part castle. I found out later it was called Green Water Castle and was built single handedly by a Tucson architect. No one lived there now--it looked like the only access was over a narrow draw bridge.

I didn't take the side trail to La Posta Quemada Ranch, even though the fork and spoon on the sign indicated access to more palatable food than my trail freeze dried meals. I beat feet up the trail a ways until I saw a thin band of green which showed the location of El Bosquecito Camp and picnic grounds. I saw picnic tables and left the trail on a barely visible foot path to cross the drainage into the camp. An RV was parked there and one tent camper who was a park volunteer. She clued me in to the situation and I camped there that night. The park closed at 5 PM so I couldn't go to the entry kiosk and pay the for the night. Good water at the camp and very peaceful.

Fireweed On The Arizona Trail