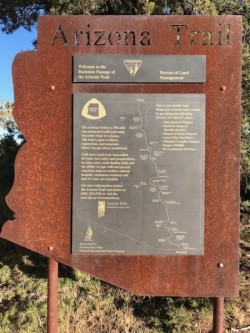 Really restless night of sleep. Very quiet last night except...I heard every commercial jet flying in and out of Phoenix. By midnight that stopped and I awoke several times to coyotes as they gobbled up prey in their little howling circles of feeding. At one point i was sure they were just a hundred yards away.

I broke camp and was on the trail at 7am. I saw those little buggers paw prints within a 1/4 mile of my tent site! Within an hour I was fully aware that I was on the Kaibab plateau: WIND! The next 6 miles were brutal and thankfully rather flat. I was hammered by winds from the west. Theres only small juniper and Pinion getting in the way. No match.


In between, I came upon new footprints. Tennis shoes. But they were headed my way? I came up to a dry and abandoned stock tank and a parked pickup truck with the windows down. I saw no road. About 30 minutes later as I was crossing a minor dirt road I saw the truck approaching. I stopped and chatted w two hunters doing some scouting. They gave me 2-16 bottles which I emptied into my containers and was on my way.

When I reached Govt Res. it was very large but very dry. The hunters were right: not going to find any water in any location that isnt concrete, like the wildlife tanks. So far thats been the case. Passing that, the trail goes into a very teeny canyon but just enough to keep the wind at bay - though it howled all day like coyotes. I crossed road 89a which goes to Jacob lake. I had two liters but the water angels left about 3 gallons here so I took two liters and headed 10 more miles traveling on abandoned dirt road, then trail again in similar mini canyonish terrain. Nothing to see all day except weeds and some angus cattle. 26.3 miles today. Stopped at Murray Lake TH which had 6 gallons of cached water and some food. Oh, and...

Lets do the numbers...

Trees I watched fall with my very own eyes: 1! I can confirm they make a sound.