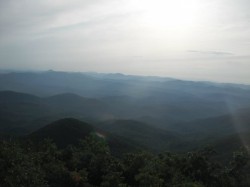 The day started uneventful enough. I woke up at 4:00 AM and was on the trail by 4:30. I really like hiking in the pre-dawn hours, esepecially in the summer. There's just something about getting 10 miles in before 9:00 in the morning.

I don't really know what went wrong but I just never could get my groove on and I felt like the trail was fighting me all day. It was hot. More ticks. The trail was in very poor condition for miles at a time. Even when it was good it was bad. I would see long stretches where I would expect to be able to make good time only to have something mess it up - there was a whole lot of "up, over, and around" involved.

To be fair, I'm not blaming it on the trail but if you've ever had a day where you just couldn't get in sync with what was going on you know what I'm talking about. Even the people I met got on my nerves. I stopped for a water break and this old woman and man out for a dayhike stopped and let their 2 little dogs jump in the stream about 12" from where I was filling my water bottle (upstream...). Oblivious to the mess the dogs were making she started asking me stupid questions about my "hiking sticks" and what use were they. She was not the kind of person you'd talk about body mechanics with so I just told her they helped me support myself when I got tired. That seemed to work and they eventually ambled off. No sooner than I had hiked a half mile, out of nowhere a huge, white cow as blocking the trail. She finally agreed to let me pass and I made my way on up the mountain.

The day did have one highlight - Rabun Bald. I climbed the tower at Rabun Bald and had sweeping panoramic 360* view - the weather was perfect for views and I got a great many good photos. After saying goodbye to Rabun Bald I made my way down the mountain, said goodbye to the Georgia section of the Bartram Trail and hello to the North Carolina Bartram and Scaly Mt.

Scaly Mt. didn't turn out to be as bad as it looked but there's no way to make a 2 mile ascent sound like a meadow stroll and this was no different. 3 people passed me on the way up and I passed them back while they were popping a squat to catch their breath later on up the mountain. Views from the top were good.

By this time, I had already decided to skip (screw?) the 14 mile roadwalk that was to begin at Buckeye Creek. When I got a cell signal I called the shuttle driver and asked if she'd take me to the Wallace Branch trailhead after a quick stop at Ingles. She said she couldn't but that she'd find a shuttle driver who could and they'd call me back. Sure enough, within an hour Ron called and said he'd pick me up at Buckeye Creek at 7:00.

That lifted my spirits a bit but not for long. I was hating this hike. I'm not a quitter but I was done for now... I made a deal with myself to leave things in the hand of fate. I told myself that if the shuttle driver would take me to NOC instead of Wallace Branch I'd go home and come back when the weather cooled off to finish. Now, in my head I figured that he wouldn't have time. It's an hour to NOC from Buckeye Creek and that would put him back home at 9:00 - a bit late. To my surprise, he said he would take me to NOC so off we went.

I would be lying if I said I wasn't very disappointed in myself. As we rode through Franklin I almost told him to just stop and let me get a hotel room so I could take a cool shower, eat some real food and pull myself back together.

The Bartram Trail follows the approximate route of 18th-century naturalist William Bartrams southern journey from March, 1773 to January, 1777. Bartram explored much of the territory which is now the states of North and South Carolina, Georgia, Florida, Alabama, Mississippi, Louisiana and Tennessee. Learn more: www.ncbartramtrail.org