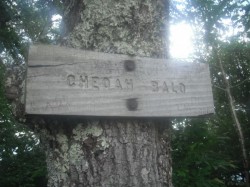 I prefer hiking long climbs in the early morning darkness because I'm fresh and I can't see what's in front of me. And I think time goes by quicker in the morning. So, I flipped on my headlamp and took off up the mountain.

Wow. What a climb. There were sections that were easily over 1000' per mile in elevation and then there would be a level stretch. Repeat. About 2 miles up the mountain it started getting light and I had this feeling like I had been transported to the Benton Mackaye Trail which I hiked in April of this year. I was hiking by a loud, big creek and just like on the BMT I kept crossing it over and over again. I didn't get soaking wet like I did on the BMT but the sounds, the terrain and the slope reminded me a lot of a few sections of the former trail.

The trail up Cheoah Bald is not traveled very often, for obvious reasons (only a masochist would climb that hill for fun) and it was as overgrown as the southern section was. There were times I had to really focus on not losing the trail - which I actually did on 3 occasions but I did quickly get back on track. The last mile was tough but at 7:10 AM I found myself looking at a trail sign on the AT that said, "Cheoah Bald". I had finished the Bartram, and I had finished it the same week that I had started it which allowed me to refile this from "failure" to "success".

And, I was now on the Big Daddy of trails, The Appalachian Trail, which is well worn by thousands of hikers, maintained, blazed and by comparison to almost any other trail - a superhighway. I had 8 more miles to go into NOC where my truck was parked and I must say I enjoyed every downhill minute of it. It took me just under 3 hours to go the last 8 miles and less than 6 hours after waking up that morning at Winding Stairs I was in my truck for the 2.5 hour drive back home.

The Bartram Trail follows the approximate route of 18th-century naturalist William Bartrams southern journey from March, 1773 to January, 1777. Bartram explored much of the territory which is now the states of North and South Carolina, Georgia, Florida, Alabama, Mississippi, Louisiana and Tennessee. Learn more: www.ncbartramtrail.org