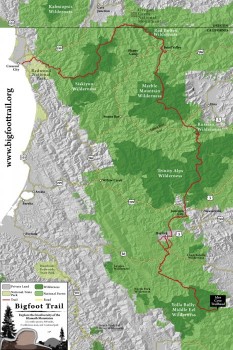 Phew, it's been fun and hectic since finishing the GDT 10 days ago. I had a

flew into Portland where good friend, famous trail blogger and quite the

hard core hiker, Wired picked me up. This is the same Wired whose GDT blog

be harder than she described!

We spent the last week hiking the easy, fun and scenic 95 mile Wonderland

Trail. She's got a great write-up at her sitewww.walkingwithwired.com.

So next up is the Bigfoot Trail. This is the creation of Michael Kauffmann,

a guy who seems really into the biodiversity of trees. He's got this trail

set up with a checklist to identify like 38 different conifers! The trail

California. Think east of the ocean and west of the Sierras. It's a mixture

of trail, no trail, terrible trail, old dirt roads and some pavement.

Frankly, I don't know a ton more than that. Not very many people have hiked

ago (other than Michael).

I'll be going against the trail notes and hiking southbound, the notes are

written the other way. It works better for me, I'll start closer to where I

am now and end closer to where I want to be. I'm super, super excited about

starting on the ocean in Redwoods state/national park. I haven't been there

since I was 13 and really want to see those massive trees again. Instead of

taking the Greyhound from Portland, I decided to rent a car which should

walks through part of the Park.

As for data, I've got the BFT maps set, trail notes and gps file. I've

heard all are a bit suspect, but will get the job done I hope. The maps for

decision. They are very nice but not so great for pure navigation. Paired

isn't exactly perfect but maybe that's not true. And I've heard the trail

notes are a little vague at times too. But hey, it's early in its creation

and I can't and don't expect perfection and frankly, this feels

adventurous! Im sure the effort Michael has put it is enormous and it's

always easy to look at the finished product and be unfairly critical. Also,

trail notes which is much appreciated.

Beyond all that I'm not sure what to expect. Maybe 20 days or so. A few

resupplies. Not sure about the weather and hopefully water had hung around

late in the season. Oh, I'm usually pretty allergic to poison ivy so

walking through crazy poison oak on the BFT might be problematic......

In the initial stage of development, the Bigfoot Trail is a 400 mile hiking trail in northern California. The trail begins in the Yolla Bolly-Middle Eel Wilderness and ends in Redwood National Park at the Pacific Ocean near Crescent City, California. A major focus along the trail is conifer diversity, passing 32 species. The route crosses six wilderness areas, one National Park, and one State Park. Northwest Californias Klamath Mountains foster one of the most diverse temperate coniferous forests on Earth and this route is a celebration of that biodiversity. Learn more: www.bigfoottrail.org