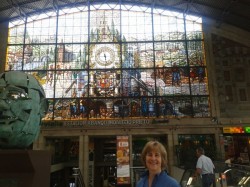 We flew in to Bilbao (in north-central Spain) yesterday after the usual too-long cross Atlantic flight that's the start of any European adventure. Fortunately we just had one long hop from Seattle to Paris, and then a short flight to Bilbao.

It helps to have some familiarity and comfort level with both the language and customs of the country you're visiting; we've been to Spain before, albeit not for a number of years, but some things come back quickly. In a truly "foreign country" I would take a taxi from the airport, waving a written hotel name and address in front of the driver. Here, we took the local bus and then walked to the hotel from the stop that a fellow passenger recommended. Total cost was less than 3 (I think it's about $ 1.40 per 1), whereas a taxi would likely be spendy (the airport is a fair distance from town).

Walking around Bilbao today has been delightful, and everyone we've spoken with has been very nice, and patient with our imperfect Spanish. For our part, we try to blend in, insofar as is possible. Perhaps my sports type "tennis" shoes aren't as completely unusual for a man of my years as they would have been last visit, but likely still stand out. Spanish males almost never seem to wear hats, even the bald ones, which takes some getting used to for me. Fortunately the cities are designed to offer a lot of shade most of the time. Most folks don't wear sunglasses either. Once we start walking the Camino proper it will be pointless to try to blend in completely, and I'll wear hat and sunglasses a lot, but for now it's nice to feel like I can be just part of the crowd.

Adjusting our bodies to the 9 hour time difference will take a couple more days but we're also starting immediately to adjust our stomachs; Spaniards eat the main meal of the day in the middle of the day, so we're shifting to that schedule too. Today's "menu del dia" featured Chicharo (sp?) (a type of white fish), Arubias Rojas (a bean dish), a chuleta de ternera (I knew that chuleta meant 'chop' but forgot that 'ternera' means veal), and a bit of Paella with the usual shellfish included. Quite a lot of food for the middle of the day, so I'm typing this up during a sort of recovery siesta period.

This morning we went to the main Cathedral and visited a couple of other churches along the way too. One had quite a lot of baroque influence inside, yet the overall archictecture wasn't baroque. I guess when they were doing the varias tablo's in the 1700's their motto about the overall architecture might have been "If it ain't baroque, don't fix it".

We went to the local tourist information bureau, where I was kind of pleased to find that my Spanish was better than the English of the person helping us, but she was very nice. She told us that the famous Guggenheim museum costs 30 per person to get into, whereas the archaeological museum (which interests me more than modern art or the right-now current exhibit at the Guggenheim) cost 3 to see. So we toured the archaeological museum, with the added bonus that it was virtually empty (and I bet the Guggenheim is packed). We'll satisfy ourselves with taking a walk in the evening along the river and past the Guggenheim to look over the external architecture of the place (Seattle residents think in terms of Paul Allen's Music Experience museum to get a sense for that).

Just walking around is a pleasure; so many European cities are designed with pedestrians in mind, and Bilbao is no exception. We took a minor detour to see the stained glass in the main railroad station, and it was impressive. Lots of fountains and statues and so forth to enjoy in this city.

I spent quite a bit of time in a "Moviestar" store trying to get my phone working here. Moviestar is a service provider akin to AT&T or Verizon for us. I actually got service with a different group, but on Moviestar's network. For 12 I got a SIM card and a month of service where I get calls at 3 eurocents per minute and a gigabyte of internet per month. If I'm careful and use wi-fi whenever I can, and for any heavy data useage, I should be fine with this --- just to do email and upload text entries (such as this journal entries) when in small towns where wi-fi isn't available. It will also be helpful to have a phone number to give to other pilgrims, and to be able to call ahead to Albergues. Maybe. It's situations like this, though, when you're trying to understand the subtle details of a cell phone no-contract contract that it really helps to speak the language a bit. Hopefully I got all the essentials correct.

We also bought our bus tickets to take us to the town of San Sebastian tomorrow. San Sebastian is also knowns as Donostia. Pretty much everything in this area is given in two languages --- Basque and Spanish, with Basque often given first billing. It's similar in Barcelona and surroundings with Catalan, ditto Valencia with their Valenciano, and as I understand it we'll encounter the same thing again later in this trip in Galicia. Spain really is a collection of (fiercely) independant communities, roped altogether and some times somewhat reluctantly so under the overall Spanish flag.

We're looking forward to quickly adapting to being here in every sense, and then just really enjoying the variety of experiences that we can have along the way.