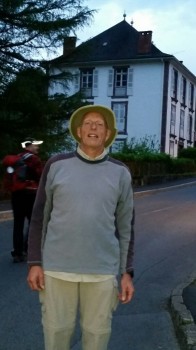 Me at the Start

Great day but a really tough start - baptism by fire literally.
Anyway, I slept quite well except for a dose of cramp in both calf muscles at the same time. I really struggled to do anything as it seemed like my legs wouldn't work so I ended up sliding down off the bottom of the bed and as soon as I got some weight on them the pain eased immediately. I'm guessing this was caused by the rather quick hike I did yesterday from the airport to the train station.
To my surprise the room charge included breakfast which actually made the cost of a single room quite reasonable. For you French scholars, breakfast in French is petite dejeuner. Now I realize why they call it petite. This was just French bread and jam along with a cup of coffee. We're so used to getting our breakfast coffee cups refilled, that I thought nothing of it when I asked the aubergue owner for another cup. That was a real faux pas as I realized only one pot was going to be made and that had to suffice for the other three guests as well. She reluctantly poured another half an inch into my cup. I didn't dare ask again.
I was out on the trail at 7:15 am after sending out a spot message. I am going to have to take the opportunities for spot messages in these towns because with all the buildings so close together there isn't much of a view of the sky. So the beginning one was about a quarter of a mile off from the starting point. I also forgot to include the code for the journal so I've asked Matthew to put it in manually so you can all see the starting breadcrumb.
The trail climbed steeply, and then more steeply, and after that even steeper again. It was tough going. The guide said there would be 1240 metres of vertical on this leg to Roncesvalles and they weren't kidding. In fact my altitude watch registered 1400 metres. But the views were great. Early on there was the valley in which St Jean Pied de Port sat which were enhanced by some low fog sitting in some parts of the valley. By the way, I read in the book that Pied de Port means "foot of the pass" so I guess there was no alternative but up and up.
The trail was quite busy although it did thin out a little as I got further up the mountain. Near the top on the French side was a small van selling various foods - I had a cup of nice hot coffee and a banana. After that, I was planning on taking lunch at the French/Spanish border but I never saw a sign. I wasn't the only one who missed it. On reflection there was this big concrete sign, almost like a big tombstone that had "St Jacques de Compostela" engraved on it. I think that was the actual border but I'm not totally certain. Somewhere up there I did cross from France to Spain. Eventually I stopped where there was a great view of the higher Pyrenees peaks that were still mostly covered in snow. Hopefully you can see in the picture how beautiful it was despite some low cloud.
As I passed the highest point beside Col Ortzantzurieta there were large pockets of snow away from the trail. But on the backside the trail actually went through a small snow field so I did get to walk on some of the white stuff. Just after that there was a junction where an alternate and supposedly safer trail to Roncesvalles was marked. By then I was hiking with a guy from Spain and we decided to take the official route, not the safer alternate. It was a little steep but it wasn't particularly challenging and we met lots of hikers on it. I could see it being a little more daunting if the conditions were really wet. But it was a lovely trail through a forest of trees that were just starting to bloom with new leaves and flowers.
And then we were in Roncesvalles. We went straight to the aubergue that is run by the monastery. The accommodations looked pretty new. They were basically four bunks in each module and there were long rows of modules. It was sort of like a jail but without the bars. I was feeling a little beat up and tired, I suspect from some lingering jet lag. So I laid on the bunk for a couple of hours and had a nice nap. Afterwards I walked around Ronsecvalles. It's a small place with really not much more than the monastery but it was crowded with lots of tourists. I took a few pictures but it was impossible to get one without a crowd of people in the way.
In the evening I went for the pilgrim's special meal for dinner. The food was ok but the company was great - an Australian, a Pole and Brit. We had a great conversion about all sorts of things and eventually had to get thrown out to make room for the next sitting. That was as much fun as the hike over the Pyrenees.