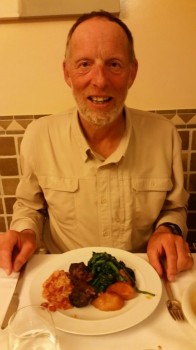 The Best Meal of the Trip

Let me start this final entry with a few highlights of my touring. I left the albergue after breakfast and walked down to the bus stop in Fisterra where there were just a few hikers. By the time the bus arrived, however, there was so many of us that some concern was spreading whether we would all get a seat. I got quite lucky in that I stood just where the bus came in and opened its hold for all the packs and I was able to stow my pack and get to the bus entry quite quickly. Being the perfect gentleman I allowed a lady to go ahead of me and we ended up sitting together. She was from New Hampshire and lived in a town right on the Appalachian Trail so we had a lot to talk about. As it turned out, everyone got on although there weren’t many unfilled seats. Luckily also, someone had told me to sit on the right side of the bus as this was the best for views. The bus followed the coastline going past a number of small harbor villages and roads that were cut into the steep hillside/cliffs and the views were incredible. The coastline here seemed so unspoilt by development that was nice to see for a change. The bus went right past the car rental at the Santiago train station and carried on another four kilometers to the bus station where I couldn't find a taxi anywhere so I walked back. Fortunately, at the rental car counter I managed to change my reservation and get an automatic car that I knew would make the driving so much easier since I haven't driven a manual car in decades.

I left Santiago and headed south into Portugal and down to Albergaria where I met my good friend Dave. He had gone to great lengths to meet up with me in Colorado when I was on the CDT and he was the "persuader" for me to come to the Camino. He was now hiking the Camino Portugues and so I thought I'd return the favor. We went out for an excellent meal at a Michelin rated restaurant that made a very welcome change from the regular pilgrim menu. We had a great evening catching up and comparing experiences.

The roads were very good but quite expensive for tolls that seemed to crop up several times an hour. They were all pay-as-you-go tolls until I headed west where I saw an "electronic tolls only" sign just as I got to a point where I had no choice but to go that way. Later I discovered I needed to go to a post office where I purchased a toll card for €20. I registered the card on my phone but did not receive the promised confirmation and calling their number didn't help as the office was now closed until Monday, as were all the post offices by now. Just to finish this story, the road to Madrid was all electronic tolls while in Portugal so I was now getting worried that I would use up all my card and end up still owing something that I wouldn't know how to pay for. I was hoping at the border there would be a manned tollbooth where they would have a total of all the tolls I'd wracked up and I could settle any debt. No such luck so I stopped at a tourist information office while still in Portugal by a few meters. The lady there told me there was nothing I could do until Monday as the post office was the only place that could help with figuring out how much I owed. But she did say my toll card should have been enough to drive across Portugal. When I got home I managed to call the toll office and found out I wasn’t on Portugal’s most wanted list and that my card was active and still had a euro and change left on it. It was a confusing system for foreign visitors and was rather worrying at the time but I guess I figured it out and all was well.

The next day I went down the coast about halfway to Lisbon. I had thought I might go down the Portuguese coast all the way to Gibraltar, then along the south coast of Spain before heading north to Madrid. I calculated how far that would be and although possible in two days, it would be all driving and no time to stop and look around anywhere. So I changed direction and headed east to Madrid. On the flight into Madrid a month ago I'd seen snow-capped mountains and discovered they had some ski resorts close to Madrid and that is where I headed. The resort I found was quite small and there wasn't much snow left but I could see it could be a fun day out with fresh snow. It was brutally cold so I didn't hang around and carried on driving over and around the north side of the mountain range. The views were really nice and I ended up at a hostel in a small village that unfortunately charged me more for a mediocre dinner than the Michelin award restaurant the night before. But such is life, there has to be something that disappoints.

The next morning I drove into Madrid and went to the Estadio Santiago Bernabeu, which is the stadium, where one of Spain's top teams, Real Madrid, plays their football (or soccer for those of you who view football as the game where the ball is hand carried). They had a stadium tour that I went on that was really well done. I got to see the stadium from high up, their museum including all off their many trophies, the team changing room, the tunnel out to the pitch, the pitch itself (but not quite on the grass) and the press room where players and coaches get grilled by the media. I was there over two hours and could have stayed another two. Parking in Madrid was a nightmare and I went to one hotel who wanted €120 and they had no parking. So I drove out of the city and found a nice small hostel with parking that was only about a 20 minute drive to the airport. And that pretty much covers the highlights and the next morning I was flying home.

Overall I had a great time. The Camino Frances is more established and consequently more traveled. The infrastructure is significant and because there are so many cafes, restaurants, bars, albergues, pensions, casa rurals, hostels and hotels, there is almost always somewhere to eat and somewhere to stay the night. That makes one able to be very flexible and not get stuck with hiking the guidebook sections. My preference was to walk early in the morning until early in the evening and I could do that in the knowledge that I wouldn’t have any problems finding accommodation. The route was for the most part well designed and it was mostly on dirt or gravel paths. There was some road walking, but it was generally short and safe. There were quite a few tracks that were built off to the side of busy roads and these were in my mind safe but not very interesting. In many cases I took the older alternates and found them to be really nice countryside hikes well away from the noise of traffic. I’m not sure why these new roadside tracks have become the primary route when these alternates are so much more in concert with the philosophy of the Camino.

The Camino Portugues unfortunately is not as well established and consequently much of the above doesn’t apply. There were very few accommodation options in between the towns bookmarking each section in the guidebook so I was forced into staying with the guidebook sections which were a little short for me but a little too long to walk two sections in a day. I know I probably came over in this journal as rather negative, especially in the section from Lisbon to Porto, but I just didn’t have the creativeness to find positives about stomping along roads dodging traffic for hour after hour. Fundamentally, there is enough infrastructure in place for now but the track itself needs a major overhaul to get off these busy roads. It is dangerous and uninteresting, especially the long walks through industrial areas. The organizations involved already recognize this deficiency and I’m told they are working hard to improve it. But as I saw myself, it isn’t easy to define a new route when businesses have got used to the income from pilgrims. They go out and erase new signs and paint their own yellow arrows to influence the hikers to go the old way past their establishments. It is definitely a big challenge not only to find better routing but also to overcome the impacts of change. Pretty much everyone has heard about how much road walking is involved and that keeps many away. If they want to hike the Camino Portugues, then most start at Porto. I believe the only way this Camino could ever hope to get as popular as the Frances, is for the routing to be fixed in a major way and that is probably something that cannot be done piecemeal. It’s a “Field of Dreams” situation – “if we build it, then they will come”.

The short section out to Muxia and Fisterra was really nice and well worth the extra days. It was well away from the major road structure and went through unspoilt countryside. It was a great way to end a long trip and see the Atlantic coastline.

Overall I took 43 days to complete the Camino Frances, Camino Portugues and the Camino Finisterre. The total length was 1510 km so I averaged 35 km per day which is 22 miles per day. Interestingly, this is higher than my consistent average on the other three trails of 20 mpd. Although I'm getting older and had to get my body adjusted to long distances twice, I think this higher average is down to carrying a very light pack and the trail isn't so mountainous.

I’m home now and getting past the jetlag. I’m not sure what is next, so stay tuned.