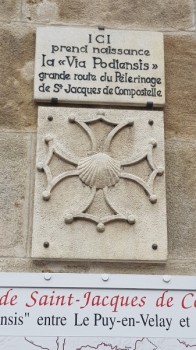 Ready to hike the Via Podiensis

My wife Ann and I are hiking the "Via Podienis", one of many pilgrim routes in Europe that ultimately end at Santiago de Compostela in northwestern Spain. This particular route is I think the most popular of the routes that a lot of central Europeans walk to make a longer journey than the roughly 500 mile trip that is common for English-speaking travelers to hike, the "Camino Frances" --- essentially all in northern Spain.

Ann and I have hiked that part, and in fact I've done it a second time with two long distance hiking friends. For this trip, we'll end at the place where those hikes began, St. Jean Pied de Port, a French village less than a day's walk from the Spanish border.

Where we're starting from is Le Puy en Velay. The trip will take us about 5 weeks, starting on Tuesday May 21st (2019).

For the first time on such a trip, we won't be carrying everything on our backs; we booked lodgings ahead too, through a service which does that and shuttles a suitcase each from town to town. The downside is that we're on a fixed schedule, but despite having just spent two weeks at a French language school (in Montpellier), our French isn't very good, so it's kind of comforting to have all of that prearranged. And this particular route (roughly 750 kilometers) ismore hilly than the more popular route in Spain. But mostly we recognize that we're getting a little older and want it to be fun, for both of us. We'll see how this goes.

Today (May 19th) we took one fast train (TGV) from Montpellier to Lyon, and then a slower regional train (TER) to Le Puy. Pretty much all of the latter trip was going through the Loire valley, often seeing the river. Very green and a lot of lovely scenes, wetting our appetites for hiking, while reminding us that it will also be wetting our persons --- as it was cloudy and rained on us a good bit as we were pulling our suitcases along cobbled roads for most of a mile upon arrival in town.

Our lodgings are a step up from the shared bunk beds of an albergue, but not exactly a luxury hotel. Nice enough, however, combining a sort of low-end-hotel/hostel along with a Gite (sort of an Albergue but a French version).

After settling in, we walked to the start of the route, the Cathedral in La Puy. It's very impressive walking up and up towards the cathedral, always inclining your head up because of the way it's situated. Then going beyond the cathedral is a huge statue to the Virgin Mary that we climbed up and further up to, and then actually up within the status, very like a sort of scaled-down statue of liberty. Fun stuff!

Tomorrow (Monday) we'll explore the town some and then start our hike with about a 15 mile stretch for our first day.

I'm a little concerned insofar as Ann has had an unhappy sounding cough that she hasn't been able to shake. We're hoping that she'll hold up to the walking to come. If not, we'll figure something out --- maybe she'll skip portions via taxi or bus or something. We're not to concerned with being purists on this trip, just to hike, see interesting places, interact with people from various countries (Okay, mostly France on this route, but still), and of course ... to have fun.