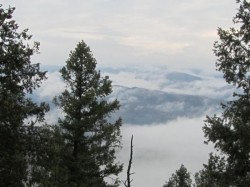 It rained as darkness came-a deluge--clearly I neglected to set up the tent correctly again because shortly I was inundated, the black plastic trash bag I use as a ground cloth somehow became soaked, my sleeping pad became a boat. I don't know how I managed to keep the sleeping pad dry, but I did.
Then at 4 a.m.-Ish, we had another downpour, I awoke at 4:45 again and rolled over and went back to sleep until 5:15, then very carefully got up trying to keep the sleeping bag and my clothes out of the flood waters. I had a short liter of water left due to the 4 mile detour roundtrip the day before, but I decided to have breakfast with the little water I had anyway.
When I got up mist was swirling round the mountains, so visibility was poor, but the view was magical. On the trail again, the mists just kept swirling creating an endless show for me. At one point, when I was walking through the forest my mind grabbed on to things that have been bothering me momentarily until I became aware of the total silence around me, broken only by the soft thud of my trekking poles against the ground and the crunch my shoes made against the pink gravel/sand I walked on. Then I let my thoughts go free and I was in the moment. Soon I began to hear birds and I saw a small bird alone high in a tree-- he sang, twee-tweet, twee-tweet, twee-tweet, over and over.
That morning I saw a single deer and several antelope-- the latter running through that harsh burned landscape- I wonder if they like the dry land--they're prolific in the Great Divide Basin.
As I approached the firehouse, toward the end of section 2, Ed from Newcastle showed up behind me, we were both out of water-- I took 3/4 of a liter from the emergency stash left there by someone before I realized we were so close to the fire station. I walked on and the land changed from the charred open spaces filled with interesting boulders and mountains, to a more wooded landscape. A couple of hours later Ed caught up with me again as I sat by a stream drying my tent and finishing my lunch. I would see him again at the end of section 3--he plans to go into Bailey to resupply and get a shower. Don't know if our paths will cross again as he is on the deluxe tour, just taking his time and enjoying himself.
Other hikers I saw today, Bart and a white-haired man at the end of section 3, I haven't seen Wendy and Don from Texas again since they said "hello" to me at the Gudy Gaskill bridge,
One thing I forgot to mention, the temperature in the mornings has been in the 60s making it easy to get up. It feels cooler tonight, perhaps because I'm beginning to go up.
We had no sun today, a few drops of rain, the temperature is in the 60s I think, really perfect hiking weather. I 'm not looking forward to the cold!
I miss Mr. Cody, but I'm glad he is safe!