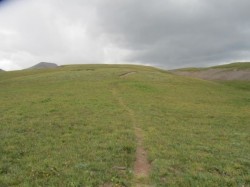 What started out as a promising day turned into a very trying one. I got up late because it was very cold and the tent was wet again from last night's rain. We were on the trail at 6:50, but even late, I soon passed two other campers; one I think was the biker I saw last night and the second, a lone person who was starting down one of the west Pole Creek trails. As I walked by the latter, I looked back and waved and he waved back.
My treat for the day was walking along one of the high ridges before Stoney Pass, when a pika stuck his cute little head up with a bundle of grass in his mouth as though he was offering it to me. We stared at each other for a few seconds that felt timeless and then he was gone.
The views continued as they have been for the last few days; climb a mountain and look back at the immense valley you came from and then look forward to yet another incredibly immense valley. From time to time the silence was interrupted by the high pitched whistle of marmots.
As I came close to trailheads, I passed several groups of hikers-- it's the weekend and people are out. It feels a little strange after spending so much time alone.
As the day wore on toward noon, I noticed the clouds gathering ominously and I began to worry about rain, with some justification as it turned out. Fortunately, I was able to dry my tent out when I stopped for lunch, but shortly after that I was hailed on.
I was walking toward the point where the CDT and CT split; the former heads to the south and the latter, to the west. At this point (mile 6.3, segment 23) the CT heads up toward the Divide, which is where I was, very exposed on the highest point around for miles, when a giant thunder clap happened right over my head--scared the living daylights out of me, and nowhere for me to go to take cover, so I kept going, my fate out of my control, a good day to live or die, depending. Shortly, the trail broke to the right and off the divide. I had my umbrella out against the wind as much as the rain, and took the switchbacks down the mountain as fast as I could.
As I went down I saw what looked like caves in the cliffs I was going to pass. I needed to get my rain gear on so I headed for one of them to do just that. It turned out these caves were old mines. I chased Cody into the back of one of them, ahead of me. I could tell he didn't like it by the way he sat behind a puddle as close to the front of the cave as possible. I put my rain gear on but knew I would soon be cold if I didn't start moving so we waited for what I thought was the worst of the rain and hail to spend itself and stepped out into it. This turned out to be wishful thinking on my part. There was a lot more to come!
The canyon was alive in color--pinks that hurt my eyes to look at. It was as though the rain had turned a bright spotlight on everything--so alive--oranges, greens, even the yellow blanket flowers looked stunning. As I walked down the canyon, cascades of water fell down the cliffs and at one point I had to walk under a wall of water coming over their top. I, at least had the umbrella, Mr. Cody looked like a drowned rat and he was not pleased. The trail was a river, and the creeks we had to cross were wide and menacing. It was as though a dam broke somewhere up above.
I was just feeling more than a bit sorry for my poor sodden self when I ran into Rob, coming up the trail to meet me with his dog, Winsor. I was so lost in myself that I didn't recognize him. I was feeling wet and miserable at this point and Rob looked like a savior to me-- if he could have taken me to Silverton I would have jumped at the chance but we were too far out. So instead I suffered through more rain and I got wetter and colder. I hoped that the sun would return long enough to dry me out and thankfully it did, as Rob kept assuring me it would.
My destination for the day was a spot by the Animus River where the databook said there was level camping, but as we dropped into the valley by the railroad which runs by the river and on to Silverton, I was thrilled to see a moose cow with her calf walking along the track. I immediately stopped to take photos. I thought they would run off, but mother stopped at a pond for dinner and she wasn't leaving. We saw a bull moose behind the pond, so it was apparently time for a moose family gathering and they wouldn't move for anything. I encouraged Mr. Cody to bark, we threw small rocks in an effort to startle them and Rob whistled at them, but they just ignored us. After about 15 minutes, we gave up and walked down the track in the other direction. Not much point in arguing with a moose, they are so much bigger!
We found a level spot to camp, I dried out my clothes in the light of the dying day, shared mealtime with Rob and thankfully fell into the deep sleep of the truly tired--what a day!