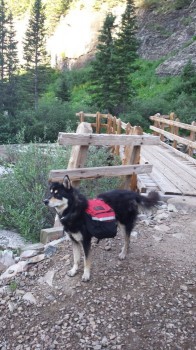 I began this trip with some hesitation. Would he have a freak-out at the Cochetopa Crossing? Answer: Absolutely NOT!

Would Buddy tire on this trip after a couple of days, 15-plus mileage? Answer: NO WAY! As long as I was going, he was willing. Never pretended to be without desire to pack along. Yeah, at the end of each hiking day, once his pack was off and he'd had a nibble of his food, he rested for maybe half-an-hour. Then, he was alert and ready to scramble up steep hillsides I wouldn't even dream of going up, with or without a pack.

Would Buddy chase the wildlife, other hikers? NOPE. Sure, Buddy would start after a rattling chipmunk now and then, but with his pack on, he knows the business is travel, not hunting. And you couldn't ask for a gentler spirit, around other people, even around other dogs. Cats, well, we didn't meet any on the trail, thank heavens. I know from back home, well, cats and Buddy don't mix well. At least, not for the cats.

Would Buddy eat his dog chow? Yeah, he wasn't wild about the puppy/kitty chow blend with the lard melted in that I had made at home and took on the first leg. Rather, he took. He carried all his own food, and some of my gear I like to keep handy. Much easier to get rain gear out of his pack than mine. Like the ideal fanny sack. And that WolfDog pack was excellent worksmanship. Rode well, easy on and off, tough enough to handle the bumps and scrapes of the trail.

Buddy much preferred eating the kibble dry, then gulping down a nice wedge of lard. Wanted to boost his calories, and lard seemed the way to go. Gotta' keep it in a leak-proof bag, though. Messy when warm.

Would Buddy have seizures on the trail? This was a concern because Buddy went through a bout of seizures some three years back when we returned from winter camping in Arizona. I even carried some of his old phenobarbitol along, just in case. He's been off that medicine for a year at the time of this hike with no reoccurance. But I wondered if the stimuli of the hike might rekindle those dreaded seizures--life threatening that they can be. But no, thank god, no.

So, here's to old Buddy dog! Yeah, he slept for about a week once we were back at home. I think he lost weight, just like I did, during the hike. But he never seemed to lose his energy (like I did!).

I can't say enough about Buddy. What I learned is, take that dog hiking if he/she's capable, trained and ready. There's only so many dog years ahead of us both.