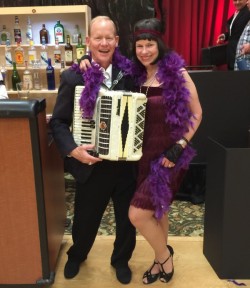 Two Step and I never really stopped training for our next hike after our last summer's journey on the JMT. It's easier to stay in shape than get into shape! But life happens, and training for the next trail journey sometimes took a back seat to other adventures. Most recently it was a three-week trip to France to study French, followed by a four-day Country/Swing dance event in a most unusual dance mecca called FreZno. For readers unfamiliar with the Country/Swing dance scene, this event involved many hours of high energy dancing that lasted into the wee hours. But somehow days of fun affected my knee negatively, and by the end of the Memorial Day weekend I was hurting and limping and self-medicating with anti-inflamatories.

A quick run to the doctor resulted in the suggestion to rest for at least a few days and see what happened (duh). So I took it easy. I took a few days where I slowly walked a couple of miles to the gym and did some upper body workouts. But while stretching one day, with one leg on a bar and the other on the floor, I hopped my right foot over about six inches. Suddenly I heard a loud POP, and I collapsed to the floor in excruciating pain. I couldn't walk without support the first day, and spent the weekend in a chair with ice and Ibuprofin, painfully stumping short distances around our house.

So, back to the doctor, this time for an MRI. I sat or limped around for the next week+ in a knee brace waiting for the results of the MRI and fearing the worse. Maybe a torn ACL or other ligament. A scary moment when I got a request to make an appointment with the orthopedist with no other comment on my MRI results. I began counting down how many days I had until we were supposed to start the CT, only 4.5 weeks post-pop.

Luckily, as the next three weeks went by, my knee got better, and eventually I got rid of the knee brace and began to go carefully out for short walks. By the time I saw the orthopedist, my leg was not swollen or tender on the outside, although I still got an occasional jolt of pain from any quick movement. The orthopedist confirmed what my doctor eventually wrote me. There was no damage to the tendons, although there did seem to be a tear in my meniscus. With the progress I had made, she recommended I take no extraordinary measures, but just see if it would get better. When told about our plan to leave for a 500 mile backpack in two weeks, she was recommended that I try to do some backpacking in the next few days, and if that went well, to continue on our trip.

It sounded like a plan to me, and for the last three days Two Step and I have been hiking eight to ten miles a day up and down the coastal ranges of Pleasanton Ridge. Even with a fifteen to twenty pound backpack, each day I've felt more stable and better than the last. While this is about half the mileage we will need to average on the CT, and about half the maximum weight (base weight + food + water) I will have to carry, this is encouraging enough to allow us to continue on with our plans. A week and a day from now, we plan to start our trip.

But first we have another dance event to attend the four days prior to our CT departure. I think I'll go light on the dancing - well, at least a little less energetic...

I would really like to avoid any more self-generated drama prior to starting the CT!