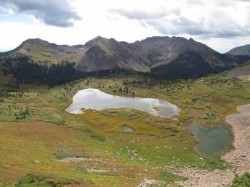 Not Without a Fight!

During the early hours of the morning we each had to pee. While out to relieve ourselves we had each taken a walk to the overlook to see the stars. Aaaaamazing!

We had breakfast in bed then packed up to hit the trail for our last full day of hiking! Before leaving I gave my fuel can to Mo, hers died last night. Hungus and I can share his for a day and a half. We said "Bye" and hiked out! On the trail by 7:00am AGAIN!

The trail lead us uphill to the Indian Trail Ridge. The sky was blue with fluffy little clouds dotting the sky. We passed a hunter looking for Elk. It still startles me to see guys in the woods with a rifle. He was pleasant. The trail kicked us and out to the ridge. These would be our last high points of the trail.

The trail peaked 4 times over 2 miles over all open exposed terrain. Not once did we actually go to the peaks. On the second to last climb Hungus made his own path and climbed to the carin signifying the summit. We still had amazing views of the last 4 days of walking. We made our way up the last peak but the view was obscured my tons of willow bushes. So it goes.

Our technical descent took us down the inside edge of a bowl overlooking Taylor lake. We skirted around the bowl and side of the lake. Before passing this water source we checked the data to see how far to the next. There were plenty along the trail.

We came to Kennebec rd signifying the end of segment 27 and beginning of segment 28, our last segment! We ran into Mike again. He had driven up to continue supporting his wife. It always amazes me that we hike our butts off and we find a road near or at the top, anyway. In the time we chatted (mostly about the CDT) with him the wind picked up and the temp dropped a bit. By the time we left him we were both chilled. We started our final segment!!!

The trail headed a hundred ft or so up to our last pass, Kennebec. We had our final experience of cresting a pass to unveil the world hidden on the other side! The world on the other side revealed a steep rocky down, smaller mountains, and the city of Durango. We started the steep down which quickly brought us over to a talus slope. We traversed with care. It then turned into the steep slopes Alpine wonderland I love so much. It was short lived as the trail continued down. We crossed a road and decided to eat lunch under some pine trees. At the tail end of our lunch the sky darkened and it started to thunder. By now we were down around 10,500' and in a wooded area so we felt safe. We put on our pack covers and rain and resumed our hike.

The rain and thunder were never too bad. It passed over us in about 20min. It rained enough to dampen the forest floor. We were glad to not be on the ridge for the storm. After another 20 minutes the air warmed up and it became humid! Humidity is a feeling we haven't felt since New Jersey. We stopped, took our rain jackets and long sleeves off. We started hiking in our tshirts.

The trail dropped down to follow along the Flagler Fork Junction Creek, that's a name. We had 2 miles of following the creek before the trail would turn uphill. The small canyon the creek had carved out was lush with vegetation. Most of the plants were taller then me and obscured the water but I could hear it. We came upon a small swimming hole and saw many trout! Hungus kept his eye open for another similar spot. We found one! He played around with the GoPro and trying to record them. I hiked ahead to the final creek crossing marked by a legit bridge. I filled up 2 liters and waited for Hungus. I would have hiked ahead but I recalled a hiker having been stalked by a mountain lion in this area and thought better to have safely in numbers. I told Hungus of my fear when he arrived. He said we had other things to worry about like the storm that was developing over us.

We started the last 4.5 miles of our day. Hungus was hiking strongly. I told him to continue and I would catch up to him. We met up at our final water source and each packed up 4 liters. This would get us through hiking, cooking, and to the end of the trail tomorrow. Right on cue as we finished the thunder kicked up and it started to rain. We opted not to put our jackets on for this rain. I hiked ahead. The trail hugged closely to the side of the mountain following the contours of all the nooks and crannies while heading uphill. The storm raged on and the lightning started. I wasn't too concerned as we were in a forest but when the count between the lightning and thunder was only 3 seconds I found a stand of trees, put my hiking poles aside and waited. Hungus caught up and did the same. The trees somewhat sheltered us from the rain too.

It was dueling thunder overhead. An area to our right would go off and before the sound even dissipated another would fire off to our left, and then directly above us. It seemed to die down so we continued to gingerly walk up the trail. We were coming out of a mountain nook when we saw the area ahead of us was a sparsely wooded aspen grove. We decided to sit tight for a moment. I was chilling down so I put on my rain jacket, Hungus did the same. The instant we got our jackets on a HUGE gust of wind came through. All the trees were bending as leaves and pine needles littered the forest floor. Immediately upon the gust dying down there was an earth rumbling clap of thunder and then the world calmed.

We could hear that the storm had moved on a bit, the gust blew it out of the canyon. Though it had stopped raining we were getting soaked from brushing up against the plants draped heavily over the trail. We hiked on and upward. We reached the top of our final climb and were treated to a view. From this vantage point we could see the path we traveled since we crossed the talus slope. The storm clouds were lifting from the canyon below. We took it all in before started our decent to camp.

We approached the mile where there was supposedly a campsite. We poked around and after a few minutes Hungus had found it on a flat spot 7' above the trail. We had reached our final home of the Colorado Trail.

We went about setting camp and changing into dry clothes. This was by far the wettest we had been at camp. Usually we'd walk through a storm then dry out on the hike, not this time. As we were completing our set up we heard more thunder as the sky darkened. We hoped in the tent.

This storm is different then any storm we've had! As I'm writing this entry it's pouring outside. Lightning is going off at frequent intervals and it's RED! The lightning is red, what is that about. The count between flash and boom is consistently between 3 and 6 seconds.

That storm raged on for 40 minutes. It let up long enough for us to cook our dinners from the tent with the vestibule flap open. The moment we were done cooking we received another wave of storms. We finished our food and buttoned everything up as tight as we could for the night.

As I'm finishing this entry it's still raining with some strong wind gusts. This trail's not letting us go without a fight!

Hungus And Pace On The CT

A journal to document the adventures of Hungus and Pace on their 2017 south bound thru hike of the Colorado Trail.

Click the link above to check out our 2012 AT NOBO Thru Hike. There is also a link for the 2013 Long Trail but only a section was documented online. Hungus finished his last LT section in October 2016.