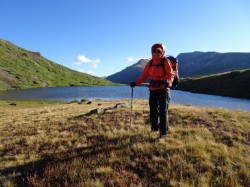 The wind had died down after we crawled into our tents last night, but it didn’t stay down. It had picked up again during the early morning hours, and it continued to blow while we were getting packed up this morning. To fight the cold and the wind, we had on almost every layer we had with us: everything but our raingear.

There were a few clouds in the sky this morning — nothing too serious; just enough to add to the pictures. Yesterday’s sky had remained clear until late afternoon. Hopefully, today’s clouds will not multiply!

We started up the first hill, and it wasn’t long before I needed to stop and shed my outer layers. I’m not crazy about hiking in long pants, and my legs don’t seem to get cold, so off came the long pants — also, the outer jacket. I had very a thin shell (1.7 oz) over my hoody, and I kept that on for most of the day. The wind continued to blow hard, and that shell deflected the wind.

The scenery today was the most spectacular of the trip. We went over about five ridgetops, and as we crossed each one, we saw a fabulous change in the landscape. All morning, I would lead the way up the hill, only to be passed by Gadget Girl when I stopped to take a bunch of pictures at the top. (GG snaps more photos than I, and better ones, but she is super quick!) I would be snapping away and then realize GG was halfway down the hillside. Then I’d scurry to catch her by the bottom. Then I’d lead up the next hill, and we’d do it all over again.

This is obviously an area where the snow lingers in the early summer. There is an abundance of tall cairns to lead hikers over the hills and across the flats. Many of the cairns have chipmunk burrows under them. I wonder why they like to dig under those tall rock structures? Each hand-built cairn is unique. Our favorite one of the day is in the shape of a pine cone.

While the scenery was spectacular, the wind was intense, and the clouds were multiplying. Around noon, Gadget Girl said how she wished Dave was fetching us tonight instead of tomorrow. The wind was miserably cold and would sometimes blow us off the trail. It didn’t take much of a discussion to decide GG would send Dave a message and ask if he could meet us at Stony Pass. In the next ravine, we found a semi-protected spot to huddle down, put on more clothes, eat our lunch, and send the message. Dave replied he would meet us at Stony Pass in about three hours. Yippee!

While we sat there having lunch, two young runners appeared, each dressed in shorts and a tank top! Where did they come from?!?!? It was like they magically appear just north of us, waved, then ran further north up the hillside. After a bit, they returned, and just before reaching us, dove off the trail into the valley below. Granted, they weren’t carrying a backpack with camping gear, but they made us feel old and slow.

After lunch, we continued up the next hill of switchbacks to the highest point of the day. Ahead was a great mountain. It was flat on top and quite broad. There were several rock formations on its face, almost like people were standing there. As we finally hiked around its side, there were more rock formations on that face as well.

Eventually, we crested over the last hill. As we rounded the top of the mountain, it was all we could do to stay upright. Luckily the wind was blowing us into the uphill-slope, and not over the side! We then began our descent into the valley below and were able to get a little relief from the wind. In fact, about a half-mile from Stony Pass, I was finally able to take off the thin shell and long pants I’d put back on at lunchtime.

When we reached Stony Pass, back on went the extra layers. The wind was blowing, and the clouds were getting darker. We could see the rain moving toward us. We were anxious for Dave to arrive and whisk us away.

We weren’t sure if Dave was coming from the east side or west side of Stony Pass. He might look for us on the east side of the Pass, where the trail had joined the road. Or, he might look for us on the west side of the Pass, 0.4 of a mile further up the road, where the trail once again turns south. I stayed with our packs at the first location while GG hiked over the Pass, in case Dave came from the west side. We had arrived almost an hour earlier than expected, so we figured it would be a while before he arrived. While we waited, we saw several quad ATVs. This pass is a popular place for people to get out and play. Again, they were all about our age. Most just waved as they went by, but a couple of rigs stopped to asked if we needed help, pointing out that we didn't want to be there if the thunderstorm rolled through. DUH! We were at 12,525' and totally exposed. I just thanked them and told them that Dave should be there any time. Still, that rain was getting closer and closer. I decided it was time to put on my rain poncho and to get the packs protected.

I no more than got my poncho on, when I heard a horn honk and saw the Jeep cresting over the top of the Pass. If that’s all I needed to do to hurry the rig along, I would have put on my poncho an hour ago!

Dave had picked up Betsy as he came over the Pass. We loaded the backpacks into the rig, turned around, and went back over the Pass and down Stony Pass Road, as the thunder rumbled in the distance. Stony Pass Road was quite a road! It was steep in areas, quite narrow, with lots of curves, and steep drop-offs. However, it was well maintained and built on rock, so it was very stable. Plus, Dave drove nice and slow! The road also had a lot of traffic, especially for a Tuesday. Most of the rigs were quad ATVs, but there were a couple of Toyota SUVs in addition to Dave’s Jeep. As we went down the road, we saw some impressive avalanche debris. One avalanche came quite close to a house. Gadget Girt was sitting in the front seat as we went down the road, so she was snapping pictures. I borrowed a couple to share the road's appearance. It took quite a while to get to the bottom of Stony Pass, but it was an interesting drive.

The weather forecast is for possible thunderstorms for the next several days. We need five hiking days to complete the trail, but we don't want to be at those high, exposed elevations with lightning all around us. So, due to time and weather, we are calling this the end of our Colorado Trail hike. We're disappointed that we won't finish, but we feel it is the right choice. Today's scenery was the most spectacular of the entire trip. What a great way to conclude our hike!