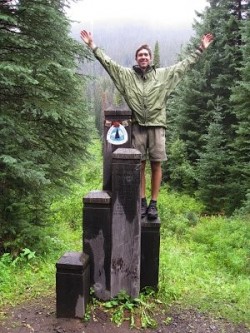 Steve at the northern terminus of the PCT- Manning Park

There are three long distance trails in the United States that make up the famous "Triple Crown:" the Appalachian Trail (AT), the Pacific Crest Trail (PCT) and the Continental Divide Trail (CDT). Each trail has a northern and southern terminus (although in the case of the CDT, I think there may actually be more than one terminus at the Canadian border- but more on that later). Hikers approach these points with nervousness and excitement for the long journey ahead, or elation at having just completed months of walking. In his day, Steve has seen 4 of the 6 terminuses (termini?). This afternoon, he saw his 5th and began his epic adventure!

Steve arrived in Glacier National Park on Saturday via the all-night train from Seattle. He stayed at a hostel last night with a bunch of other aspiring southbound thru-hikers. In all, Steve said that there will be more than a dozen hikers starting southbound on the CDT in the next day or two. That's a veritable herd for the CDT, especially southbound! Apparently, there is even going to be a kick-off party of sorts this evening at the hostel in East Glacier. But Steve's feet are getting restless, and he's concerned about the availability of campsites in Glacier Park (hikers must camp at established spots). So in a spur-of-the-moment decision, Steve decided to leave the group, get a ride to the Canadian border, and get started today! He watched the mandatory bear safety video at the ranger station, obtained the necessary permits, selected his campsites, and now he's on his way!

Steve decided to start from the "Chief Mountain" terminus of the CDT. From what I understand, there are two possible northern termini- Chief Mountain and the Waterton Trail. Steve selected Chief Mountain because it has less snow and is more manageable right now. In a couple of weeks, the park rangers will clear the snow (I think via dynamite?) from the Waterton route. The journey has begun!