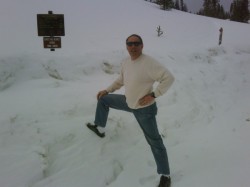 Here we go again – another crazy adventure. For those that are reading about me for the first time, please go see my Pacific Crest Trail journal for all the background – the link is at the bottom of this entry. After finishing the PCT in 2009, I have been very busy and active. Amazing really, because I was so concerned before the PCT about what I would get up to in retirement that would keep me from getting bored . Now, I can’t imagine how I had the time to actually go to work. Ann and I have a done a lot of work on the house, making it more efficient energy-wise. We’ve even become our own utility company with a solar electric system. Whether that is a sound financial investment is questionable, but it makes us feel good that we’re doing something for the environment and it’s sure nice to have almost no electricity bill to pay each month. But despite all of this, I have still missed the adventure and dramatic scenery from the PCT. I got a taste of it last year when I hiked out of Walker Pass for two days with the Flying Kiwis. Then I spent two weeks camped at Onion Valley and provided some trail magic and mostly rides to/from Independence, Lone Pine and Bishop. Although it was a lot of work – I drove 3,000 miles in two weeks ferrying hikers around – it was still a lot of fun meeting all the hikers that had just done half of the Sierras and were coming out over Kearsage Pass for resupply. Recall that I didn’t need to do this on my PCT hike because I got this great offer from another hiker to “mule” my resupply to me and I spent a wonderful zero just lazing around Charlotte Lake.

This craving for the daily dose of wonderful scenery and adventure led to me deciding that this summer I would tackle the Continental Divide Trail, or CDT. This trail runs from the Mexican border in New Mexico up through the Rockies to the Canadian border, following as close as possible the Continental Divide. It is not as mature as the PCT and direction finding is going to be critical. There are also many alternate routes and although an “official” route is slowly evolving, it is not fully designated from one end to the other like the Appalachian Trail (AT) or the PCT. By all accounts it is more challenging than the PCT and even more spectacular. The plan is to attend the ADZPCTKO – the kickoff event for the PCT thru-hiking contingent – in Lake Morena the last weekend of April and then fly to El Paso on 2nd May. I have a ride organized that will pick me up at the airport and take me to the Crazy Cook terminus of the CDT. I picked this route over the other two alternative starting points because it seems to have become the official terminus and there is a monument there for the CDT. Its disadvantage is that it’s in the middle of nowhere and I gather takes several hours driving of dirt roads to get there. Hence the need to get a ride organized ahead of time.

I’ve read that about 3,000 start a thru-hike of the Appalachian Trail each year, 300 the Pacific Crest Trail, but only 30 the Continental Divide Trail. So the CDT isn’t going to be a busy thoroughfare of hikers. With the PCT, I was often asked whether I was doing it alone and my answer of “yes, because I don’t know anyone else crazy enough to do it with me” usually shocked folk. But I knew on the PCT that if anything untoward happened someone would come along within a few hours who could render assistance. On the CDT, it’s likely I won’t see anybody for days. With that scary thought I plan on a few changes for this thru-hike. When I was up at Onion Valley last June, I met a New Zealander – trail name Hurricane – who was thru-hiking the PCT. We talked a little about the CDT and I told him about my early thoughts of tackling it in 2011. To my surprise over the winter he sent me an email asking if I was still planning on doing the CDT because he had thoughts of attempting it as well and, like me, was a tad concerned about going it alone. So now I have a hiking partner. He is flying to LA the week before the kickoff and will stay with us a few days while he gets some last-minute organization done before we start.

I did check out the trail in February on my annual ski trip which this year was in the Breckenridge/Vail area. I found the trail where it crossed the road between Dillon and Breckenridge. There was a mountain of snow that almost buried the sign. See the picture. I’m banking on all this being history by the time I get that far.

So at not make these entries too long, I’ll pause here and discuss all my gear additions and preparations in the next entry.