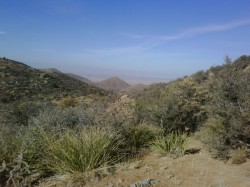 Out of the Desert at Last

What a difference a day makes. It didn't start off on a high note as my mattress was flat again when I woke up. The repair looked fine so I'm thinking it's got at least another hole if not many. At the moment it's not a big deal but it will be when I get to the higher altitudes where the night temperatures will be much lower. I'll give it another go in Silver city but if that doesn't work I'll have to get a replacement.

Although we only climbed less than 2000 ft yesterday over 15 miles, the difference in the weather and environment was very noticeable. It is much cooler and we're starting to see some trees at last (they were a novelty down on the desert floor).

We started off early at dawn and hiked up a dirt road. When we got to the next water source I met another CDT hiker, Gail from Seattle. She was the one that had water cached in the bear boxes and she told me about her friend who was helping her and the three upcoming caches. She said there was more water than she could use and we were welcome to take the rest. So overall, with yesterday's bonus of dry tanks now being full and Gail's caches, what originally was going to be a really tough stretch has turned out to be a section where water is plentiful. I even jettisoned some since there was no need to carry so much.

Hurricane and I checked out the solar powered water source. It had clean water from the faucet at the well head. But this one was driven by a single solar panel, versus the four at the one I found on Saturday. This system wasn't for farming but for improving the habitat for wild animals. It was paid for by donations and installed by the New Mexico Habitat Association.

The trail continued on a dirt road although it was becoming less of a drivable road. After a big berm to stop motorized vehicles, there it was, our first single track trail. Eureka! And, it was the real deal not one of those fake trails those devious cows made to get us hikers lost in retaliation for invading their territory. It was a great trail as well, going up and over several hills. The trees are now abundant and at last we are hiking in a forest as opposed to a desert. The weather is perfect as well - sunny but not hot and a nice cooling breeze. There is also abundant shade for drink and grazing breaks. We even met a group of about ten day hikers and had a long chat with them.

By late afternoon we had got back down to the road and then we had this climb up the Big Burro Mountains to Jacks Peak where there are a load of communications towers. It was a tough climb, very steep in places. I don't think I've got my climbing legs yet, but it was a good tune up for what's to come.

At the top, I found Gail who had decided to stop for the night. We were chatting while waiting for Hurricane and guess what I saw walking along the ridge about 200 ft away - a bear. I never saw a single one on the PCT and now I see one on the first mountain of this trip - go figure. Although it was rather windy on the top of Jacks Peak we decided we were going to stay as well. I put my tent up for the first time primarily to prevent anything blowing away in a gust. Although we are within sight of all these communication towers, cell reception was weak. But it did allow the download of a few emails which were not good news from this Miller Fire in the Gila National Forest. Looks like we might be changing our plan since the route we want to take is closed. But that's tomorrow's problem to sort out.

Overall an excellent day with forests and mountains to enjoy - sure beats that hot desert.