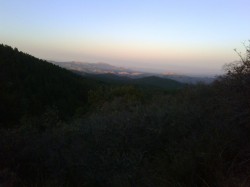 It was quite a cold night but the wind from yesterday had abated. We started out with a little climb and then it was almost all downhill. The views were incredible as we were up close to 8000 ft. The trail was well marked and in good shape although we had some interesting challenges ahead.

Our maps said that a new trail was in the process of being established to avoid the really long road walk into Silver City. But the note was from 2008 and it said the new trail wasn't connected yet so we should ignore all the new trail markers. You might be asking the question why would they put in markers at the trail junction when the trail dead ends somewhere in the wilds. We were asking the same question as we were trying to decipher the notes and the map. We came to a junction that was clearly marked to turn left but oddly there was a small rock cairn on the right hand trail. There was a junction on the map where turning left would take us down to the first natural water we would find on the trail at Mud Spring. But we couldn't believe we were there yet as we had estimated it would take a bit longer to get there based on the map mileages. The maps showed this little alternate labeled the scenic route and we assumed that the Forest Service had deemed that scenic route to now be the CDT and put in the new signs. Although I didn't turn on the GPS it would have told us to turn left (this is hindsight of course).

It would have all become obvious if we had seen the spring a third of a mile from that junction but neither of us did. We continued to follow the signs but then we got to a point too far from the expected junction and hadn't seen it yet. So then I turned on the GPS and sure enough we were on the official route so we carried on.

Quite a bit later we were still following the well-signed trail but this nagging concern was emerging because we seemed to be mostly heading north and by this time we were expecting a more easterly direction. Hurricane shouted to me that he also thought something was wrong so I turned on the GPS again and guess what - we were about a mile off trail. We were now actually in the wrong canyon and there was this enormous hill right in the direction of where we needed to get back to the official route.

Well you know what men are like, there is no way we are going to turn around, that would injure the ego way too much. It's not that big of a hill, we'll just bushwhack up and over it. Nice idea but the brush was thick and in places I was actually on my hands and knees trying to squeeze through under the branches of the rampant bushes. But as we got higher it thinned out a lot and was a bit easier although it was still fairly steep. When I reached the top to my surprise I saw a truck and thought that there must be a road. We had come upon a homestead but it was guarded by two big dogs that barked incessantly at us. Although they weren't leashed they didn't run at us, for which we were grateful.

We thought we knew where we were on the map and the GPS said we had more cross country to get back on trail. Although the small road we were now on wasn't on the map, my theory was that roads lead to other roads and we should take the road down rather than more bushwhacking. And that turned out to be one of our better decisions of the day as it eventually got us back down to the Forest Service road that was now the trail, at least per the GPS. We passed an RV park and a little later a truck stopped and it was one of the owners of the park. He had trouble interpreting our maps but confirmed we were on Tyrone road. So with his help we made it past the enormous Tyrone mine to the Hwy 90 and eventually after walking beside this busy four lane highway to Silver City. Needless to say I wasn't thinking about taking pictures through all of this.

We were still trying to understand what had gone wrong and later in the hotel room Hurricane and I figured it out. If we had turned right at the junction we would have linked up with Tyrone Road a few miles east of where the official route now meets it. The official trail did go left at that junction and follow this new trail past Mud Spring. But after a couple of miles when it crossed a small dirt road that is point where we should have ignored the signage and turned right instead of crossing the road. Why they wouldn't put a sign at that point to say the trail ahead isn't complete yet blows my mind that they would risk people going down a blind alley out in the wilderness. Because I'm not carrying enough batteries to keep the GPS on all the time, I just use it when signs have disappeared, but we were on such a well marked trail it didn't seem as though we could possibly be off course. It's easy in hindsight to figure out what the cryptic notes on the map now meant to say. When we met Gail in the evening, she had followed exactly the same route we did. The difference was that when she figured out her mistake she retraced her steps back to the dirt road - she is a woman after all.

In Silver City the news wasn't good about the fire. Someone in the Hike & Bike store told me the visibility at the Gila Cliff Dwellings was 20ft at times due to the smoke. The place was mostly evacuated and everything was shut down. The road is closed as are all the surrounding trails. So we have some major re-planning to do.

I retrieved my resupply from the post office. I called Ann and she tracked my Doc Cambells box that was the Gila resupply and found out they were not able to deliver it and it was in Silver City. I found the UPS customer service center and it was a short walk from the hotel and when I got there this super-helpful UPS agent even remembered my parcel. Show me your ID he said and it's yours. But before I could say anything he corrected himself and said it was out on a truck being re-delivered. So he said come back later this evening when the truck returns and sure enough the delivery truck couldn't get out there again so I now have two boxes and eight days of food.

I couldn't find Hurricane when I got back to the hotel and couldn't call him because his phone was locked out and he wasn't able to work through the maze of AT&T's automatic customer service (a complete misnomer as it seemed to be set up to maximize customer frustration). It was getting late so I wandered off to a nearby restaurant and on the way I met the barmaid from Lordsburg. Small world isn't it. We had a good laugh and off to get dinner I went. It was a nice restaurant but I ended up sitting at the bar and having an excellent burger and caesar salad.

Tomorrow will be re-planning and strategizing.