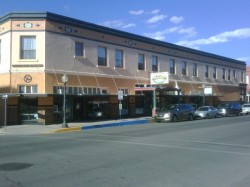 We stayed in the Palace Hotel last night (and tonight) in the downtown area of Silver City. It's a very old building but the rooms are modern and it's close to a number of nice restaurants. Gail's friend Sharon has been a true trail angel and ran us around town to the Forest Service, Walmart, AT&T and Albertsons.

Now for the planning around the fire. It was already a disappointment that we would miss the Gila Cliff Dwellings and the Gila River which were two of the main highlights of New Mexico. But that route is impossible at the moment. Tomato called me this afternoon telling me he was in the back of a police car on his way back to Silver City after making it as far as Doc Campbells close to the dwellings before being stopped by the police (he went through the cordon legally before the fire flared up so much and spread rapidly with the high winds).

Our first thought was to do the Black Mountain route which is actually the somewhat "official" route (after yesterday's route challenges, I'm being more circumspect about describing any route as official anymore). In my planning, I had elected to take the alternative route through the cliff dwellings and the Gila river for three major reason: 1) it's supposedly the more scenic of two very scenic routes, 2) the official route bypasses the cliff dwellings that I was intrigued to go and see, and 3) the dwellings/Gila River route has a resupply option at Doc Campbells. The issue with the Black Mountain route is that it is in the region of 200 - 230 miles in one stretch. That meant starting out with at least ten days of food which in itself is, for me, a monstrous load. On top of that, water is a big issue in a normal year and all the reports suggest in this driest of years that most of the marginal sources will be completely dry. That distance is almost close to double anything I have attempted on the PCT and with the need to stock up to the maximum on water at every one of rare opportunities, I was really concerned about my ability to carry such a load and still hike over 20 miles per day for ten days straight over some pretty rugged terrain. Hurricane was echoing my concerns and given he isn't yet up to his hiking peak of fitness (not that I am either, but I think I'm a tad closer), we were both feeling nervous about this plan.

We went to the Forest Service and there was the most helpful ranger I have had the pleasure to encounter. She was very frank about what was happening with the fire and the shortage of water everywhere. She even quoted a cubic feet per second of water flow on a snow melt fed creek/river (I can't remember which one) but the point was that it was one tenth of normal. So we both came to the conclusion that attempting such a plan was plain foolhardy. Tomato is going to attempt it, but he's young and extremely fit and will do it in much less time, probably seven days is my guess.

So now to plan B. Tomorrow we will start out from Silver City and hike the trail towards Black Mountain but we will stop after two days at Lake Roberts. Sharon will come and pick us up and bring us back to Silver City. She will also meet us tomorrow evening where she will bring several gallons of water allowing us tank up for a dry day on Friday. After another zero in Silver City she will make the 60+ mile round trip to ferry Gail, Hurricane and I to Snow Lake on the north west side of the forest away from the fire where we can get back on trail and continue northwards to Pie Town. This means we will hike all of the CDT that is presently open. It does leave a small gap and my anal mind has difficulty accepting that but my more objective side says if it ain't open then it ain't the CDT, at least for now. I'm sure all of you will allow me a bit of license here since I'd rather finish the trail with this little gap than risk the alternative which I think would be sheer folly for Hurricane and I.

I feel like the SPOT is a comfort item that also helps all of you to see my daily progress when I'm out of cell coverage, but I really don't want to put myself in a situation where the likelihood of needing the SOS button is high. No SPOT message today as we're in the same place as yesterday. Normal transmissions will resume tomorrow once we're back on trail.

Thanks to all of you for the motivational messages in my guestbook. I hope you are enjoying the reports. When I get back I'll respond to all of that have included an email address.