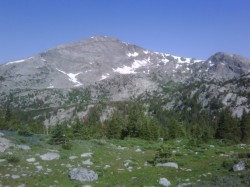 It was a cold night, the coldest for some time. I even pulled out my warm jacket and slept in it and I was still only just warm enough. My sleeping bag is rated to 15 deg F but I think the loft has gone in a few places which seems to create a few cold spots. It also rained for a while. It was a real struggle to get up so I didn't start very early. I kept rationalizing that if there was a lot of snow up on the pass then it's better to give it some time to soften up.

As it was there was nothing to worry about. The pass had a good trail to the top and the snow had melted out on the trail. On the other side of the pass there were plenty of flat areas so in hindsight I probably should have kept going last night.

A little later there was another pass to climb and this one had quite a bit more snow. It was interesting on this one to guess where the trail would go and it was amazing to see where the trail builders managed to find a way up the steep slope and still find room for switchbacks to lessen the grade. At the top, the trail went straight down and immediately lost all the altitude only to climb again over yet another pass. All of this up and down was to get around Mt Baldy, a standalone 12000 ft plus grey rock peak.

Just before Pole Creek, a difficult ford I had heard, I reached the trail junction where I had to decide if I wanted/needed to break off and go into Pinedale. I had studied the maps for the rest of the Wind River to Brooks Lake and there is a lot more of these energy sapping climbs and descents. So far, even on fairly flat sections the trail is very rocky in places and I have to be ultra careful getting past some of the obstacle courses. This, along with all the flooded and muddy parts made for slow going. So I believe I would likely run out of food before Brooks Lake. On top of that I was really feeling like I needed a break. It was only lunchtime and I was already tired which was worrying as I clearly haven't got over whatever knocked me out a few days back. So I decided I would take the option to go to Pinedale.

While I was eating lunch three NOLS folks came by who had just summited Mt Baldy. We talked a lot about the Winds and the instructor showed me on his maps the route I needed to take. My map did not show the route past the first few miles but he told me it was well marked. He also told me where I had to cross Pole Creek and that it was only thigh deep at that point.

It was almost 11 miles off trail to get to the Pole Creek trailhead. It took all afternoon but it seemed forever. I met two large groups of Boy Scouts coming the other way as well as a couple of lone hikers. I made it to the trailhead at 6:30 pm and the parking lot must have had fifty vehicles in it. But there wasn't a soul around and there was absolutely no traffic. Supposedly this was an easy place to get a ride but I think my timing was bad and that it was a little late for people to be getting back to their cars and leaving. But then I got lucky and two folks came walking up the road and I asked them if they were going down to Pinedale and if so, could I get a ride. Luckily they said yes. They were part of a group of four that had been hiking in the Winds for ten days. I squeezed into the back seat with my pack and half an hour later they dropped me off in Pinedale. I got lucky again when the first motel I went to had one room left. Later I heard that every motel in town was full. I had dinner at the Wind River Brew Pub and of course I had to sample some of their better brews.