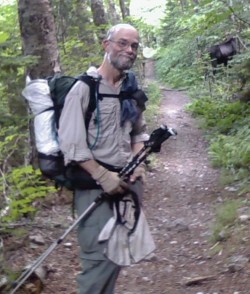 Going for the Triple Crown

There’s a hiking organization that I belong to (one of several actually) named ALDHA-West. These folks administer what’s called the “Triple Crown Award”, which they give to anyone who has hiked every bit of all three of the so-called “Crown Jewel” trails of North America: The Appalachian Trail (AT), the Pacific Crest Trail (PCT), and the Continental Divide Trail (CDT). With the first two of these under my belt now, and with friends who recently hiked the CDT and spoke highly of it, it just seems kind of irresistible (“resistance is futile”) to hike this third “Crown Jewel” trail. So I’m going for it starting tentatively in June of 2011, going SOBO (SOuthBOund). The plan is that Milky (Jim Bispham) will come over from his home in England and that we’ll hike it together. We both reckon that this in particular is a good trail to hike with a partner, and there’s no finer partner than someone you’ve walked with quite a bit before. And I’d add that in general it would be very hard to find a better hiking partner than Milky.

Perhaps I should have started out by introducing myself, as not everyone finding their way here will have read my other trail journals ---
I'm Brian Lewis, I live in Washington state, I'm in my mid-50's in late 2010 as I write this, and I am preparing with this latest journal to thru-hike the Continental Divide Trail. My trail name is "Gadget", a sobriquet I gained on the Pacific Crest trail in May of 2008. If you're not familiar with the concept of a "trail name", you can find a description of this phenomenon here.

And FWIW, if you want to look over my 2008 Pacific Crest Trail (PCT) Journal, start here.
For my 2010 Appalachian Trail (AT) Journal , look here. (plus there are links to both at the bottom of every page).

Note in general that there is inevitably some thru-hiker jargon that will creep into these journal entries. If you see a hiker-geek term that you don't recognize, have a look at this list of "trail terms and slang". It's aimed at the Appalachian Trail in particular, but much/most of it is of general use on any long trail.

When there's a picture on any journal entry page you can click on it to enlarge. The date that each entry (this is a journal "entry" you're reading now) is on the little summary data to left or right, just under the bold heading "Daily Summary". Really, it's all pretty straightforward if you poke around a bit. There's also a "guestbook", which you're very welcome to leave comments in; I try to respond to at least most of these, though when I get on the actual trail I won't be too good about that (fair warning).

Okay, anyway I have mixed feelings about going SOBO vs. NOBO. While I was hiking the AT this year, Milky looked into it and came to the conclusion that SOBO is better, primarily I think because that direction offers a much better chance of being able to walk through the San Juans whereas it sounds like NOBO hikers often have to do a road walk around them as the snow hasn’t melted out enough by the time they get there. It would be a bit easier for me to go back and do the San Juans another time, but for Milky coming from England --- it does indeed make a whole lot more sense to try to go through them on this trip, and I’m kind of jazzed to see them too. The one caveat there is if the pattern of snow pack and snow melt is such that there’s just a ton of snow in Montana (start of a SOBO trip) in June, we could still end up switching, but I think it likely that we’ll do this trip walking south.

Starting in Montana we’ll have snow to deal with in any event, it’s just a matter of how much. There are two different possible start points on the north end, depending on snow conditions. There are also something like three different ending points, BTW in New Mexico, all of which are “valid”. Unlike the other “Crown Jewel” trails, the CDT is a lot more free-form. You start at either the Canadian or Mexican border and walk until you get to the other border, sticking as close as you reasonably can to the Continental Divide, but there are just lots and lots of alternates and variations along the way such that likely no two people that walk the whole CDT walk the exact same route unless they’re literally walking it together.

We’ll start in Glacier National Park, where I understand a person has to work with the Park to register for specific campsites; hopefully that won’t be a problem. I won’t be eager to do high mileage days to start with, in part due to a desire to “break in” at a reasonably sane pace (toughen and strengthen back up to thru-hiker condition), and partly to appreciate and enjoy what Glacier National Park has to show us as we’ll be walking through it. This will also be the part where there are grizzly bears. I’m not much concerned about black bears, I’ve had a number of encounters with no problems, but I think that grizzlies sit slightly higher on the food chain --- and know it. One man was killed (eaten) and another couple of people injured by a grizzly bear just this past July at Yellowstone National Park, so while rare, this can happen. Adds just that extra tingle of adventure into the mix don’t you think? :-) I might even carry pepper spray for the first bit of the trip. Hmm, or better yet, maybe I can talk Milky into carrying it …

My wild guess at this point is that I’ll be shooting for on the order of 10 or so resupply boxes, but I haven’t done my homework on this yet. I’m pretty sure I’ll want more than the five I used on the AT, and definitely less than the overkill of boxes I had on the PCT, so something like 10 sounds about right.

We’ll be carrying heavier loads on this trip (than I did on the AT) I think. We’ll need clothing and sleeping gear for cold as well as wet weather for quite a bit of the trip, food resupply points will be farther apart (with longer hitches into towns in general), and at some points water supplies will be farther apart too. So, as the song says,

All I know, all I know is that duct tape will save the day. Or something like that.

I still don’t have a resolution to my vision issues (CRVO); the lab study I had been in terminated, so I’m now exploring other options for treatment. I’d really like to have clear vision in my right eye for this trip so I could avoid wearing glasses, and have good 3-D and just in general clear vision. TBD, but whatever happens there won’t stop me. And I have no (new) residual foot issues this time (Yay), so I’ll hopefully start out in decent shape.

Bring it on, I’m looking forward to hiking in yet entirely new trails that are reputed to offer a great deal in the way of both beauty and solitude!