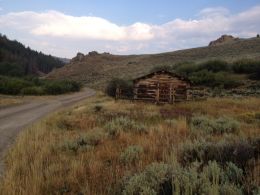 the road down from the Divide at Lemhi Pass

This morning, as we hiked on the road to regain the trail, I realized that the next 26 miles on the Divide to reach Bannock Pass were too remote and challenging to take a chance on. My knee didn???t want to straighten out all the way, lacking about 10 to 15 degrees. Well it could straighten if I wasn???t careful, but then I got that sharp pain at the knee cap. I quickly made the decision that we???d better leave the CDT here at Lemhi Pass, to avoid the possible necessity of having to require a backcountry rescue, putting other people at risk. My intellect made that decision, while my emotions leaked a stream of tears for several miles.

We chose to head toward the Montana side, though we had motel reservations in Leadore, ID, for tomorrow night. The cell phone was not getting in reception. The Idaho site was steeper, and 18 miles to community of Tendoy. On the Montana side, it was only 12 miles past two or three ranches to a ???highway.??? Probably not the best choice as it turns out. Even after we got down out of the mountains, there was still no cell phone reception, as we hoped to call a trail angel named Trish who was going to meet us at Bannock pass tomorrow afternoon. The highway we were heading for would go through Bannock Pass and down to Leadore. Unfortunately it was no highway, but a little used dirt road. There was traffic coming into the Bar Double Ranch, but not out. Finally, after 5 hours and 11 miles, some ATVers hailed some ranch hands in a pick up truck for us. We asked for a ride. I had made the right decision; my knee was getting worse.

We learned a lot from the ranch hands. The Bar Double Ranch is a huge property with a ranch history dating back to 1883, but is no longer owned and operated by a family, as per my romantic notion. It has recently been bought by Car Quest Auto Parts. At Bannock Pass and the MT-ID border, the road became paved, and the truck had to slow for cowboys herding cattle through the Pass. Because of the drought and the rising price of corn, beef cattle are being sold quickly because the ranches can???t afford to winter over these cows. Beef prices may be good for a while, but then are likely to be expensive come spring. Just a hunch. During the summer, the cows are free range, including in the National Forests. Ranches pay the US Government for the right to let cattle loose in the mountains.

In Leadore, we enjoyed the hospitality of Aleta and Mike Ries who own the comfortable Leadore Inn. They are interesting and engaging people who have worked in law enforcement and fire fighting careers. Very community minded, they remain involved as EMTs, Hospital Board members, etc. Mike was once the mayor of Leadore. They are problem solvers, and Mike was quick to assist us in trying to extricate ourselves from this rural area. There are no taxis, rental cars, buses or trains here. Tomorrow, he and Aleta will take us the 46 miles to Salmon where there is a tiny airport.


Sent from my iPhone

Fruitcake & Nutz On The CDT