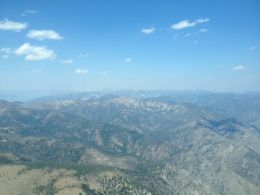 Idaho side of distant Bitterroot Mtns

We fight for the opportunity to buy Mike and Aleta lunch at a nice restaurant in Salmon before they take us to the airport. It was tough. They are very generous people.
The airport was tiny, and the plane we were led to was, well, very tiny. My dad used to fly one of these little four seaters, but the pilot was probably no older than my daughters. She was very capable though, and we flew over the Idaho mountains, dodging smoke from the forest fires. Some deep breathing techniques helped me hold onto my lunch. We were able to get on this flight, being fitted in with a group of three planes on a chartered fishing trip. We met some nice guys at the airport in both Salmon, and debarking in Boise. They had had a great time on the Salmon River.

In Boise, we were able to get a flight back home on much bigger airplanes. The service was not as personable as McCall Aviation, however. We stayed the night at an airport motel, and enjoyed a celebratory dinner at a nice restaurant, nearly empty. The hostess told us that she was glad for the rest, as all week they had been catering to fire fighters. Celebratory Dinner? Well, yes, ofcourse. Though it looks like Postholer missed some miles somewhere, by our count we did over 600 miles of the Montana CDT. We had a fantastic time, as our readers know. I knew going into this that my left knee may be a problem, but I had to try. This is what I love to do. And I love the fact that Randy has been such great support through all of this. He knows me well (and still loves me!) I hope that Dr. Branche will be able to help my knee and perhaps I will have to finish this trail in smaller chunks of 100 to 200 miles at a time. I may have to wear a knee brace or something. The Triple Crown is not just awarded to through hikers, but to all hikers who complete the AT, PCT and CDT, one way or another. Yes, even to those who wear Kinesiotape. Determination and a love for just being out there is what it takes. Until next time.
Fruitcake

Fruitcake & Nutz On The CDT