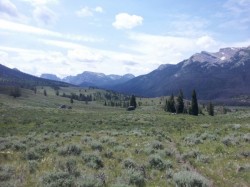 Looking Back on the Winds

Seems like there is a consistent weather pattern at the moment as it rained again last night for several hours. Another wet tent to deal with this morning. As I predicted yesterday, the trail kept going down as it paralleled the Green River and the Green River Lakes. When the river widened it was called a lake and when it narrowed again it was back to a river. The river/lakes continued to be surrounded by massive granite walls. It really was quite spectacular which makes it even more annoying that the camera on my phone seems kaput.

Eventually the granite walls subsided to be replaced with rolling green hills and I assume this was the northern end of the Wind River Range. This was a spectacular range of mountains and certainly a place I'd like to come back to.

This was also the time to pay the piper and recover much of that lost altitude. It was also the hottest part of the day and I was going pretty slow up the hill over 2000 ft to Gunsight Pass. I have to admit I was pretty pooped out when I got to the top. On the way up I thought the phone must be warm so I gave the camera a try. Lo and behold it worked for two pictures - one looking back up the Green River canyon and the other the green hills that the river was now running through. Unfortunately the camera then died and so did the phone which had to be rebooted.

The descent down from the pass was fairly gentle although the trail was often hard to follow and there were lots of blown down trees to navigate past. Although much of the trail was in forest there were also a lot of large meadows with creeks flowing through them. I did a good job all afternoon of keeping my feet dry even though on the last crossing off the day I went across in bare feet as there wasn't a rock hoping opportunity and I was so close to camping I just didn't want to deal with wet boots and socks so late in the day. I think I'll sleep well tonight.