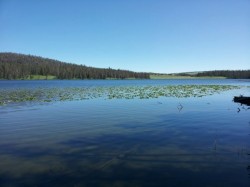 The Lake in the Woods

The weather pattern seems to have changed. It was clear sky all night but compared to the other nights it was much colder. As a result I took a bit longer getting up this morning. Once I did get going the trail for most of the morning was quite gentle and easy to follow. It opened up into a couple of large plains that were several miles across. There was evidence of deer or elk but I never saw any wildlife of any type except a few birds. Then I came to the Lake in the Woods and I thought it looked so pretty especially at one end where there were numerous water lilies growing in the water. So I gave the camera another go and it worked, so I'm keeping my fingers crossed it might have recovered.

After lunch I hiked a three-mile dirt road which felt a little tough on my feet and actually gave me a blister. Just before leaving the road I did see a lady on a dirt bike followed by four ATVs. Other than a few other dirt bikers seen from afar that's all the people I've seen since yesterday lunchtime. There aren't many hikers out here on this stretch.

Then I went down to Leeds Creek which was very scenic except there was no trail. It was over two miles of cross country mostly high above the creek and maneuvering around groves of fir trees and ploughing through very soft earth that was riddled with gopher holes. I made it through quite easily which then made reconnecting to the trail tread even more annoying when I couldn't find it anywhere. With the GPS I actually positioned myself on an official trail waypoint and there absolutely no sign of any trail. So I set a bearing to the next waypoint and headed off cross country. Eventually I found a trail but it was very hard to follow as it would just disappear especially in clearings. I was using the GPS almost constantly just to stay on course. I think that is going to be the norm for the next few days reading the comments on the maps.