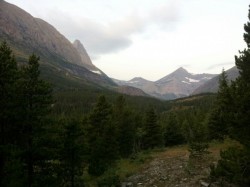 I was up and out early again but this time I had the longest segment in the park, some twenty miles. I quickly got to the Swiftcurrent Pass trail and like almost all of these trails close to where many people have access it was wide and easy on the feet. It went past a number of lakes that were all interconnected. Consequently it didn't climb very much in the forest during the first five miles. When I got out of the trees, all I could see were these enormous canyon walls with no sign of a trail and a feeling that how could a trail every get up them. The closer I got to the steep walls the more I wondered until eventually it became apparent how it was going to reach the pass. As with many of these pass trails, it was another engineering masterpiece carved out of the rock.

Near the top I met a couple who were excited because they had just seen a grizzly. Then I met a party of twenty who also saw the grizzly. But with all the noise they were making I didn't hold out a lot of hope that he'd still be around when I got there and sure enough he was long gone.

On the back of the pass there was a chalet that was like the huts in the White Mountains of New Hampshire except this one just provides a bed but no food service. It's a way for folks to get out hiking but without the hassle of camping. I didn't go down to the chalet, instead I turned into the Highline trail. This trail was cut high up the mountain slopes so there were great views as it was mostly above treeline. Unfortunately the views were spoiled by fire - the forest was mostly burned and there was heavy haze that I'm told was the result of numerous fires all over the western US.

I spent all afternoon on this trail. Towards the end there was a waterfall running down the mountain and across the trail. When I got there it was a spring that was simply gushing out of the ground some thirty feet above the trail. I've seen a lot of sources of springs but never one with so much water as this one. Then I reached the campsite which was bigger than any of the others I'd stayed at. It was busy as well and only one site was left so that is where I'm set up for the night. I had a nice evening chatting with the other hikers as we all prepared dinner so overall it was pleasant end to the day.