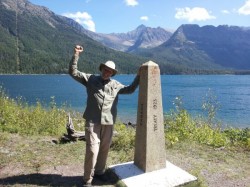 Celebration at the Border

It started to rain between 4:00 and 5:00 am and it was quite heavy for over an hour. Somehow the incentive to get up waned until the rain actually stopped so I wasn't on the trail quite as early as I'd planned. After cresting a nearby saddle, I was told it was all downhill to Waterton Lake but I didn't anticipate quite the steep descent through the forest. Looking more closely at the map, the campsite was close to a pass. The views before the forest were nice as the rain seemed to have cleared out the smoke haze, at least for a while. The overgrown undergrowth was the problem as it was waist high in places and soaked from the rain. So it wasn't long before I was drenched from the waist down. Fortunately it wasn't cold so I stayed warm as long as I kept moving. After nearly six miles, there was a trail junction to Stony Pass and from there onwards the trail had been brushed (the undergrowth cut down creating a wider trail) and with the sun starting to peek through I started to dry out a little.

I reached Goat Haunt ranger station which is at the southern end of Waterton Lake. There were two US customs and immigration agents who briefly quizzed me but once they figured out I hadn't come from Canada and I was a US citizen they were no longer interested. They are based at the ranger station because there is a boat service from the Waterton Lakes township to Goat Haunt and they have to check all the people on the boat that have just entered the US. My question to them was where do I find their Canadian counterparts and they told me I had to voluntarily go to the RCMP office in Waterton Lakes and tell them I'd entered Canada. I had lunch by the lake and dried out my tent and a few other items. I had a campsite booked close by but I was now there at lunchtime so I decided to press on and finish today rather than hang around until tomorrow. That town magnet was just too strong. I did get the ranger to cancel my reservation so it opened up for others to use.

The trail then went down the Waterton Lake shoreline although it was mostly in the adjacent forest and only briefly came down to the shoreline. I met a nice couple who were walking from Waterton Lakes to Goat Haunt and then taking the boat back. I joked that I wished I was twenty minutes earlier as they could then take my picture at the border.

And then I was there, at the US-Canada border. I let out a little yell of accomplishment but it was a little muted celebration as I was there on my own. There was the familiar swath of trees taken out that went up the canyon on both sides and two border monuments, one from the 1908 treaty and another from the 1925 treaty. I tried to take a picture holding the phone but that wasn't too good so I then messed about with the timer and trying to set up the phone to point at me, the monument and the lake. But then the couple I met earlier came back and told me they had just encountered a black bear that came up from the lake and was walking along the trail towards them. They decided to turn around and walk back to town which was lucky for me as now I could get some better pictures.

Then I set of for the final five miles into the Waterton Lakes township. The Canadian side of this trail was a lot more challenging than the US side with a steep hill to go over and an overhanging cliff with equestrian warning signs to lead your horse. I had to duck a little so it would've been impossible to ride a horse through it. As I reached town I went through an enormous campsite filled with massive RVs and then I reached the RCMP building. I did a telephone interview with an immigration and customs agent and got the OK to stay for a day. I quickly found a nice hotel in the middle of town and after a shower went to a nice lounge for a couple of microbrews and a prime rib burger - a nice end to a memorable day.

So there we are, I've finished the Continental Divide Trail and also the Triple Crown of the three major US National Scenic Trails. This trip was somewhere between 1000 and 1100 miles and overall the three amount to almost 8000 miles. Somehow that seems an insurmountable distance to walk but with patience, commitment, perseverance, 400'ish days to spare and a loving wife who tolerates such eccentricity, it's possible. Now I'm off to meet my good friend Howard and be a tourist for a couple of days with a couple of day hikes thrown in just to wind down gradually.