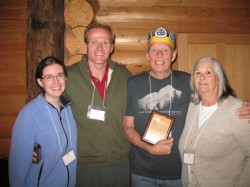 Me and the Family

I’m safely back home and getting into the swing again of a leisurely retirement. Getting back from Waterton lakes worked out really well. The shuttle system rules meant I had to get a Canadian shuttle to the border, walk across the border and then catch the US shuttle that also came from Waterton Lakes. But it all worked out despite the complexity and when I reached East Glacier, there was my buddy Howard waiting for me. He had got there early enough to get a really nice campsite at Two Medicine. His camping tent was like a hotel suite compared to my single person lightweight tent. The next day we hiked around the lake side of Rising Wolf Mountain and all the way up to Dawson Pass. Despite the bright weather prediction, we got rained on in the morning, although it cleared up by the time we reached the pass. On the way back we went down to the ferry ramp and caught the ferry back to Two Medicine across Upper Two Medicine Lake. The next day we got up early and drove to Many Glacier and hiked up to Ptarmigan Pass and through the tunnel built through the rock near the summit. On the way back we took a detour to Iceberg Lake which was very scenic. Then on the way down we were caught in a major thunderstorm and I had all my raingear on and still got quite wet. The third day we drove across Glacier National Park on the Road to the Rising Sun and the plan was to stop at Logan Pass and hike the lower part of the Highline Trail. Unfortunately when we got to the pass the low clouds were ripping over the pass and obscured any and all views. It was unlikely to clear up so we kept driving and saw the rest of the park including Lake McDonald lodge on the west side as car tourists. After a nice relaxing couple of days in Seattle, I flew home on 1 September in time to just meet the deadline for the Triple Crown nomination.

At the end of September Ann and I met up with Matthew and his wife Karen and we went to the American Long Distance Hiking Association – West Triple Crown dinner and award ceremony in Nevada City which is about fifty miles north east of Sacramento. The Triple Crown is awarded to folks that have walked the entire length of the Pacific Crest Trail, Appalachian Trail and Continental Divide Trail. It doesn’t matter how long it took and it’s all based on the honor system. I met a few friends there – Why Not from the PCT and Paranoid and Speedstick from the CDT in 2011. The award ceremony was a lot of fun and I elected to have Matthew speak on my behalf as my sponsor. He had prepared a speech and it was hilarious and very witty. I was humbled and very proud of him, so I make no excuses for including the complete speech verbatim below.

My name is Matt Shaw and I'm the son of Peter “Peanut Eater” Shaw.

First off, thank you for allowing me to speak tonight as an invited "sponsor" of the Triple Crown ceremony. I do however, have an urgent issue to address, one in which many folks in this room may often encounter. For the last four years, my father "Peanut Eater" has been a “hike-a-holic”…and since August 26th after finishing the CDT, a recovering “hike-a-holic”. For months at a time, he will go missing or wander off with only a spot signal and journal entries typed via cell phone recapping his travels. Before he leaves for these excursions he is clean shaven, has his hair combed and leaves with a plump belly. When he returns, he has a scraggly beard, knots in his hair, and is as thin as a beanpole. His hiking addiction started the day after he retired in 2009. In fact, we attended his retirement party on the night of May 8th, 2009 and at 3am on the morning of May 9th we were up way too early driving him to the Mexico border to begin the PCT. When looking back on his three journeys across the country, I wonder to myself, if perhaps some of the blame is on me. Am I an enabler? Do I need to step in and hide the trail mix, string cheeses and Nutella? I then realize that this hiking addiction is one of the best things that has happened to my Dad – (obviously outside of him meeting my mom and maybe me being born). So Dad, here’s a salute to your accomplishments, crazy and all, and that Mom, Karen and I (along with countless others at home), are extremely proud of you. Well done old chap!

And to all those newly minted Triple Crowners in the room, we salute your passion for hiking and drive to see this beautiful country in a way that only a limited few ever accomplish. Congratulations!

So there we are. I never would have believed anyone who’d told me when I first set out that I’d walk all three major trails from end to end, a total of almost 8000 miles. A lot of friends have been asking what next? At the moment I don’t know, but stay tuned to this site and you just might see another journal pop up. Thanks to all of you who sent messages of support throughout this long journey – they meant a lot to me. And finally, a very special thanks to my family for their support, tolerance, encouragement and love. Signing Off.