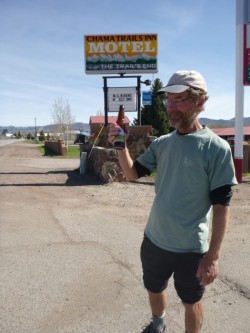 There's not a lot to say about walking seven miles along a paved road, except that it went quickly. JD drove me out to the little cairn I built on the edge of the highway to mark the spot where I left off the day before. He took a picture and I started off. The seven miles would have gone quicker had I not stumbled on a place serving breakfast.

While waiting for my meal, I had time to reflect on my CDT experience. The decision to hike this trail was made 29 years previous, in 1984. When my plan to thru hike it fell through in 1985, the plan went on the back burner of my mind where it smoldered for thirteen more years. By then I had gotten married and fathered two children, and it was not practical to leave my family for five months. So I did the next best thing. I started section hiking at the Canadian border in 1998. Fifteen years later, here I was sitting in a restaurant just a mile or two from completing the dream.

I remembered sitting in a similar restaurant in Anaconda, Montana. I had a video camera set up on the table to film myself devouring a plateful of food when some of the other restaurant patrons asked me what I was doing. I told them I was making a movie about my walk across the country, and immediately felt presumptuous and foolish saying that. I think everyone in the restaurant was impressed except me because, well I was really still in northern Montana and had an awful LONG way to go to the Mexican border and I wondered as I bragged about what I hoped to do if I could ever really do it, could I follow up on what I just said and actually go the entire distance, which was vast and still lay before me.

Now I had my answer. The answer was yes.

Even though it was well before noon, I celebrated with a beer. I'm glad JD was there to celebrate with me!

[The celebration continued later that day in Pagosa Springs with a great meal at the Pagosa Springs Bakery and a soothing soak in the hot springs next to the San Juan River. With JD's help, I made it to the Durango airport in time to catch a flight back east, where I then was able to enjoy seeing my daughter graduate from college. Is life good? Damn right it is! Hog out.]

The Land Of Enchantment